The summer of the smartphone shortage 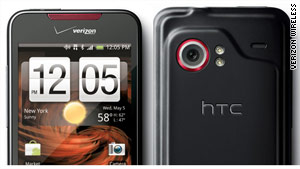 Verizon customers wanting a Droid Incredible, released in April, are experiencing delays in getting the phone.
STORY HIGHLIGHTS
RELATED TOPICS

(CNET) -- I can't tell you how many people I've talked to this summer who have told me that they had finally made their decision to get a new smartphone only to have their plans thwarted when they got to the store and their well-researched choice was unavailable.

This is exactly what happened to my former college roommate, Stephanie Rahill. After months of research and several conversations with me, her husband came out of the Verizon Wireless store three weeks ago and told her that she would have to wait nearly a month for her new HTC Droid Incredible smartphone.

"When he came out of the store empty-handed, I was like, 'Where is my phone?'" she said. "My current phone has a crack in the screen and won't last much longer. He had researched which phones he wanted us to buy for two months, so he wanted to wait. But I was aggravated."

The Rahills' experience is not uncommon this summer. From the hot new iPhone 4 to the HTC Evo 4G and the HTC Droid Incredible, millions of potential consumers are leaving stores empty-handed with nothing more than a promise that they'll get their coveted smartphones in a matter of weeks, if they're lucky.

Customers wanting an Apple iPhone 4 will have to wait about three weeks. HTC Evo phones are sold out indefinitely, and HTC Incredible phones are back-ordered at least a month. As Motorola's Droid X goes on sale this week at Verizon Wireless stores, some people wonder if there could be shortages of that phone as well.

"Smartphones are what people want," said Roger Entner, a senior vice president at Nielsen. "And they want the best and the hottest devices. That's creating a lot more demand in the market."

Indeed, smartphones are hitting the mainstream and customers are clamoring for the latest and greatest devices. First-quarter sales of smartphones worldwide jumped 48.7 percent compared to a year earlier, according to market research firm Gartner. Highly subsidized price tags are attracting customers as well as a growing portfolio of new devices. For example, every major U.S. carrier now has at least one Google Android phone in their lineup.

"The iPhone used to be the only game in town," Entner said. "Now with Google Android, there seems to be a cool new phone coming out almost monthly. And it's getting tougher and tougher to predict the winners."

The rebounding economy may also be playing a role as people feel more secure about upgrading their phones and signing up for more costly data plans.

But the growing demand for these new phones is putting a strain on suppliers and wireless providers selling these devices.

Sprint Nextel's CEO Dan Hesse told The Wall Street Journal that stronger-than-expected demand for the new Evo 4G has resulted in shortages across the country. Sprint hasn't released sales figures for the Evo 4G, but the Macquarie Group said Sprint has sold about 300,000 of the phones since it went on sale in early June, according to The Journal.

Verizon Wireless customers looking to get their hands on the HTC Droid Incredible, which was released in April, are also experiencing delays in getting their phones.

A representative from HTC, which makes the Evo 4G and Droid Incredible phones, said the company is working as quickly as it can to meet demand.

"We've seen huge demand for the Evo and the Incredible," Keith Nowak, a spokesman for HTC said. "These are complex devices, and it's harder to get some components than others. So it's a combination of having really strong demand and getting the right components together."

Nowak wouldn't specify which components are in short supply. But analysts say that touch screens made by Samsung Electronics have been hard for HTC to get its hands on. Samsung has plans to build a $2.2 billion factory to make the screens, but it won't start operations before 2012. In the meantime, HTC has added other suppliers for the touch screens, such as Sony, which could help alleviate some of the backlog.

Analyst Charlie Golvin of Forrester Research acknowledged that growing demand is driving the shortage. But he believes larger suppliers such as Motorola may be better prepared to handle the onslaught. Verizon Wireless will begin selling the Motorola Droid X, another Google Android device, on July 15. The phone, which is the next generation of the popular Motorola smartphone, is expected to be a strong seller.

But Verizon Wireless spokeswoman Brenda Raney said she believes the company will have plenty of devices in stock to satisfy customers.

"While we are currently experiencing delays on orders of one of our more popular phones. We view that as an anomaly driven by a combination of supply and popularity," she said. "At present, we feel that we have done everything possible to ensure we have inventory to meet customer needs around the Droid X--the proof will be in the execution on July 15."

But HTC isn't the only cell phone maker having trouble meeting demand this summer. Apple has also struggled to keep the new iPhone 4 on store shelves. When the device was available for preorder on June 15, nine days before it went on sale in stores, demand was so strong it crashed AT&T servers.

Thousands of customers were unable to preorder their phones. On June 16, AT&T suspended preorders. When it started taking orders again, customers were in line to get their iPhone 4s the first or second week of July. In some markets, people currently ordering a new iPhone 4 are being told they'll have to wait three to four weeks for their phone.

While this is a good problem to have for handset makers and wireless providers, it's also somewhat dangerous, since some disgruntled and impatient consumers may be tempted to buy another device or even choose a different provider. Some may even choose to not buy a new phone at all.

Nick Hermandorfer, of Austin, Texas, said he was ready to buy a new Evo 4G two weeks ago after he saw a co-worker watching World Cup action streaming over Sprint Nextel's 4G wireless network. But when he called the local Sprint store, a salesman told him the store was sold out. The store will soon have supplies in his area, but now that the World Cup is over, Hermandorfer said he isn't sure he needs the Evo 4G.

"I was really sold on Evo 4G two weeks ago when the World Cup was happening," he said. "But now I feel like I can wait, since there isn't really anything that I want to watch streamed live. I'll probably just stick with my BlackBerry now for a while."

Other wireless providers are working hard to make sure that shortages do not turn into lost sales. My sister, Beth Gellene, who lives in Needham, Mass., had been a long-time Sprint Nextel customer, but she wanted to switch to AT&T for the new iPhone 4.

When she went to the AT&T store days before she was supposed to leave on a month-long vacation, she was told by an AT&T sales associate the store wouldn't have any iPhone 4s for at least three weeks.

As she debated whether to simply leave the store without a phone and keep her Sprint service a little longer, the salesperson offered her a deal she couldn't refuse. She could have an iPhone 3GS loaner until the new iPhone 4 is available at the store, which would likely coincide with the end of her vacation. So she paid for the new iPhone 4 in advance and took the iPhone 3GS home for the month.

Forrester's Golvin said that my sister's situation sounds like a very special case, but it illustrates how eager retailers are to close a sale -- especially when the sale means picking off a customer from a competitor.

"The market that we are in today is one of winning your competitors' best customers and preventing your own customers from leaving," he said. "This sales associate recognized that if he didn't give her the iPhone 3GS, he risked losing her to Verizon or Sprint."

Generally, though, Golvin said that when faced with a delay, consumers are more apt to stick with their carrier and simply choose a different phone. In other words, most consumers are more loyal to their cell phone provider than they are to any handset manufacturer.

"In all the research that I've done, the percentage of consumers who say that the phone is the most important thing in their decision-making process is only about 3 to 5 percent," he said. "For most people, the carrier and network are more important."

The length of the delay is also crucial in predicting whether consumers abandon their dreams of a particular phone or wait it out.

"If it's a week, most people can wait," he said. "But if it's a month, people will likely start looking at other devices."

And that's a big problem for companies like HTC that use Google Android, an operating system that is in dozens of other phones made by competitors, such as Motorola and Samsung. If Stephanie Rahill had gone into the Verizon store instead of her husband on that fateful day three weeks ago, she said she would have walked out with a phone, any phone.

"I have three kids," she said. "I don't care what phones we get. I definitely would have walked out of there with something. Now I have to make another trip to the Verizon store to pick up our new phones, have them activated, and have our contacts switched over. That's just a hassle I'd rather have avoided."