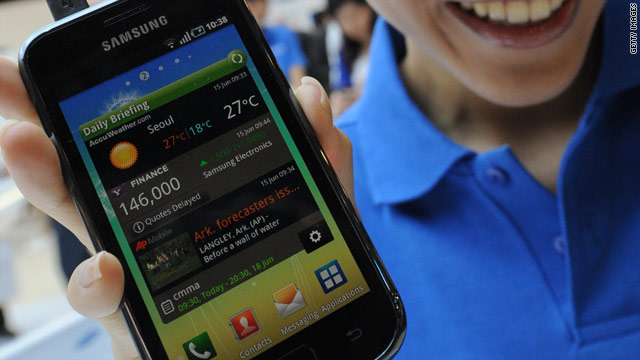 (Wired) -- It appears that technology giant Samsung is handing out free Galaxy S smartphones to iPhone 4 owners frustrated by reception problems. An account on Twitter called @samsungukmobile is contacting people who've tweeted about their difficulties with the handset, asking them to submit their contact details to receive a free handset.

One of those offered a handset was Tiffany Nieuwland, who told Wired: "My iPhone and I have been inseparable for almost a month now, tomorrow being one month since the iPhone OS 4 launched. But the honeymoon period ended this week as repeated dropped calls, and a sudden unexplainable inability to make or receive calls or send texts left me disgruntled.

"So I did what anyone else would do: I vented my frustration on Twitter. Imagine my surprise, then, when this morning I am tweeted by Samsung offering me a free Galaxy S, their latest phone. Too good to be true? I decided to investigate.

"I called a friend at Samsung, and though she was initially sceptical, it has now been confirmed: the campaign is legit. Samsung is so confident about the superiority of the Galaxy S that they're sending free ones to existing iPhone customers so they can decide for themselves."

It's an interesting and unconventional approach to marketing the device, which is powered by Android 2.1 and features a whopping great big 4.0-inch AMOLED display. It's entirely possible that Samsung has taken a gamble that getting a few of the devices out in the wild, so that people can see and play with them, will be worth the initial outlay in terms of the effect they'll have on sales.

Tiffany added: "I've been waiting for an excuse to try out an Android for months, but it is yet to be seen if I can be persuaded to stray." Would you convert to Android if the phone was offered up free? Tell us in the comments.

Update: We've got official word from Samsung that this is legitimate. A spokesperson for the company told us: "Recently there has been a real increase in online activity from consumers dissatisfied with some of our competitors' products. We decided to contact a cross section of individuals to offer them a free Samsung Galaxy S as a replacement, as we're confident that once people have the phone in their hands, they'll see how impressive it is for themselves."