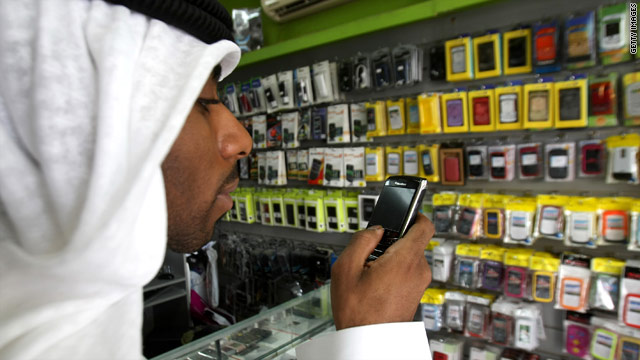 A man in the United Arab Emirates checks out a BlackBerry on Sunday.
STORY HIGHLIGHTS

(CNN) -- Smartphone users in countries all over the world could lose some privacy if threats and promises by foreign nations to shut down BlackBerry services goes through, analysts say.

On Sunday, the UAE threatened to block access to e-mail, web browsing and text messages on the popular smartphone on October 11 if its owner, Research In Motion, doesn't provide government access for security investigations.

Read more about the Saudi decision

"The impact can be huge if this thing continues to go forward," said Kevin Burden, a vice president and mobile-industry analyst with ABI Research. "If something like this holds up, you can expect governments in other emerging markets to follow suit."

Burden cited reports that governments in countries such as China, India and Kuwait already are considering similar requirements. They would no doubt be emboldened to move forward if the UAE acts, he said.

The threatened October 11 ban would affect more than a half-million BlackBerry users in the UAE, as well as visitors to Dubai and the rest of the emirates.

"My sense is that the UAE goes after RIM and BlackBerry, saying 'Let's start with the king in all of this. Let's knock them down, then all of the others will fall in place afterward,'" he said.

Operating systems such as the iPhone's and Google's Android often store information "in the clouds," meaning over the internet, Beyers said, while BlackBerry sends data to its own offshore servers. Virtually all smartphone systems geared toward corporate clients are encrypted, though, he noted.

What is "cloud computing?" Read the CNN.com article.

"RIM has been known as the very buttoned-down, corporate smartphone supplier," said Tim Beyers, a senior technology analyst for The Motley Fool. "Security is the No. 1 reason that perception has remained. That is their competitive advantage and anything that dilutes that story dilutes their corporate advantage and makes it harder for Research in Motion to grow."

Beyers doesn't predict that a ban in the UAE would lead to widespread government data grabs in many other countries. But some would definitely try, he said.

"It is chilling," he said. "I wouldn't overstate the concern, but at the same time I also think that if they're forced to create some sort of back door, there is the possibility that other governments will ask for a similar back door. Then that would be a problem."

In a written statement to CNN on Monday, RIM said it operates in 175 countries and does not comment on the talks it has with governments about privacy rules.

"RIM respects both the regulatory requirements of government and the security and privacy needs of corporations and consumers," the statement said.

"RIM assures its customers that it is committed to continue delivering highly secure and innovative products that satisfy the needs of both customers and governments."

The United Arab Emirates is defending its decision, with its ambassador in Washington arguing the United States and other countries require the same kind of access for security reasons.

But State Department spokesman P.J. Crowley called the move "a dangerous precedent," saying the United States supports the free flow of information and that the department will be "clarifying" the UAE's reasons for the announcement.

Both Burden and Beyers say the UAE government obviously would rather get concessions from RIM than shut down BlackBerry service altogether.

Burden expects RIM to seek support between now and October by making the case that a UAE ban would hurt other businesses and consumers, not just its own.

"[A ban] ultimately would be a very bad thing for RIM and it would be a bad thing for a lot of corporate e-mail systems as well," he said. "The reason we're all willing to use our BlackBerrys -- why our own government and the U.S. Congress can do it -- is that there is this promise that this is secure information.

"If you strip away that confidence, those are huge implications."