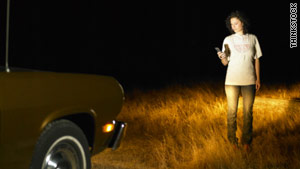 Calling 911 from a cell phone may not connect you to local emergency services as fast as you need.
STORY HIGHLIGHTS
RELATED TOPICS

(CNN) -- In an age when cell phones dominate, calling 911 might not always be the best way to report an emergency.

911 technology was developed before mobile phones. With landlines, it's easy to associate a definite location with the phone number of an inbound call. Not so with cell phones.

Calling 911 from a cell phone will indeed put you in touch with local emergency services. However, they might not be quite as local as you need.

For instance, in Oakland, California, all 911 calls from cell phones are routed to the California Highway Patrol. That's great if I'm reporting a car accident on the Bay Bridge. But it might not be as efficient if my house is on fire.

In fact, the Oakland Police Department goes so far as to advise: "DO NOT CALL 911 from a cell phone. When you call 911 from a cell phone, the call is routed to the California Highway Patrol (CHP). The CHP then has to reroute the call to your local police or fire dispatcher, losing precious time."

The Oakland police were advising this even before they decided not to respond to 911 calls about certain kinds of crimes after layoffs this summer.

Waiting to reach the correct response agency for your emergency is one problem with mobile 911.

Another problem is that responders won't immediately know where you are. So if you lose your connection or drop your cell phone while running for your life before you get a chance to give your location, they might not be able to find you.

This does not mean that mobile 911 is useless. In fact, it's crucial -- and it's even required by federal law. It's just not as reliable as calling 911 from a landline. So cell phone users should adapt their 911 practices to suit the mobile era.

The Federal Communications Commission requires all wireless carriers transmit mobile 911 (e911) calls to "a Public Safety Answering Point (PSAP), regardless of whether the caller subscribes to the provider's service or not."

And also: "Within six minutes of a valid request by a PSAP, [the carrier must] provide the PSAP with the telephone number of the originator of a wireless 911 call and the location of the cell site or base station transmitting the call."

In an emergency, six minutes can be a really long time for emergency services to wait to get a clue about your location from a wireless carrier.

And that's not even your actual location -- not yet. It's just the cell tower you happened to have used.

In fact, U.S. wireless carriers are not required until 2012 to provide emergency responders with the latitude and longitude -- accurate to within 300 meters (984 feet) -- of a 911 caller.

So what can you do?

For every town where you regularly spend time (home, work, school, friends or family you visit often), check in with local emergency response agencies to see whether they recommend a special number for mobile 911 calls. If they do, program those numbers into your phone.

If you can't find this information online or in a local phone book, call the local Police Department's nonemergency number during business hours and ask what they recommend.

Keep this list of local emergency numbers short. Only program in the numbers for the towns, cities or counties where you spend most of your time.

You want to be able to find these numbers fast in an emergency and not call the wrong place. But you should use 911 if you're not sure of or can't quickly dial the recommended local numbers.

Also, check whether the states where you regularly drive have a special cell number for highway emergencies.

But most importantly: When calling 911 from a cell phone, say where you are first.

If you're unsure of your exact address, at least name the town or neighborhood and glance around quickly to see whether there's something you can say you're near (such as the name of a nearby business or street, or a noticeable landmark). Then quickly explain the nature of the emergency.

Before you get into the situation details, give your cell phone number. If you get disconnected, emergency services might not know how to call you back -- but with your number, they can either re-establish contact or enlist your wireless carrier's help in finding you.

It's a good idea to practice this routine.

As you're out and about, imagine that there's a emergency. Rehearse what you'd say if you called 911. (Don't actually call 911 -- just pretend for practice.)

An effective mobile 911 call might sound like this: "I'm at the corner of Broad and Spruce in Philly, and I just saw a bicyclist get hit by a car. She's hurt. My phone number is ..."

Yes, this is not as simple as just remembering to call 911, but that's the reality of the cell phone age.