Apple trademarks 'There's an app for that' 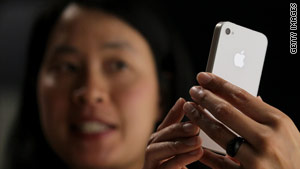 (CNN) -- If it can't be done on an Apple product, there's no longer officially an app for that.

Last year, Apple filed for a trademark on its buzz-worthy phrase, "There's an app for that," which was used in a commercial for the iPhone.

Then last week, the trademark was granted by the U.S. Patent and Trademark Office.

The trademark award was reported by TUAW, The Unofficial Apple Weblog.

As writer Brian X. Chen of Wired.com noted on Monday, the phrase has become an easy joke whenever mobile phones are discussed, and a hearty crutch for tech writers writing about a new application for the iPhone or other smart phones.

Sadly, as he notes, the trademark won't stop that.

"[T]he trademark won't end the cheesy 'There's an app for that' jokes we see in blog posts and articles almost every day," Chen wrote. "But it will prevent competing tech companies from pilfering the phrase for similar products."

Verizon last year used a play on the famous phrase in an ad highlighting the range of its geographic coverage that quipped: "There's a map for that."

The slogan has been used by Apple to hammer home what the company feels is a major advantages over its smart-phone rivals. The Apple App Store has more than 250,000 apps for the iPhone, iPad and iPod -- more than any competitor.