With surprise boost from Steve Jobs, news app is a hit

Palo Alto, California (CNN) -- You've heard of the "Oprah effect." Having the queen of talk endorse your product can be like winning the lottery.

In the technology world, the same apparently applies to Steve Jobs. That's what some Stanford University grad students learned when the Apple CEO praised their iPad app during a recent event.

Akshay Kothari and his partner, Ankit Gupta, both from India, have no experience in journalism. Yet their creation, a mobile application called Pulse that aggregates news from multiple sites, is one of the top-selling news apps for the iPad and its smaller cousin, the iPhone.

The app got an unexpected boost when Jobs mentioned it onstage at Apple's developers conference in June.

"That was really special," said Kothari, co-founder and CEO of Alphonso Labs, which produced the Pulse app. "We got the biggest stamp of approval we could have gotten."

The idea for the app originated while the two were taking a Stanford course for aspiring entrepreneurs. The class, called Launch Pad, challenges students to create a product in the course of 11 weeks. 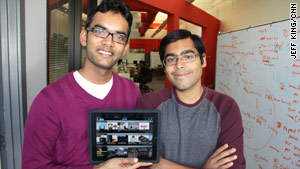 Akshay Kothari, left, and Ankit Gupta created the Pulse news app for the iPad and other devices.

Kothari, 24, who considers himself a news junkie, didn't like how he had to view several different apps to get the news he wanted. He wondered whether it would be possible to take content from news sites and, using RSS feeds, create a rich, aesthetically pleasing app.

Pulse, which also has an app for Android devices, allows users to assemble content from as many as 60 publications. Users also can touch a link that takes them to the actual publication's website.

"The first week of class, we decided we're going to do something for our iPads, and we released our app in six weeks," Kothari said.

The pair had no real hopes for the app and didn't imagine turning it into a full-fledged business. And yet today their company has six full-time employees and is moving from the small Palo Alto office it shares with other startups into its own office space.

A representative from Time magazine recently paid a visit to inquire about a possible partnership, Kothari said.

"It's been a truly exciting ride, and we hope it stays like that," said Kothari.

The Pulse app costs $1.99 for the iPad and 99 cents for the iPhone and mobile Android devices. The company declined to disclose revenue figures.

The Stanford duo's timing could not have been better. The mobile news industry is exploding as more and more people rely on smartphones and tablets to stay connected in their daily lives.

Smartphone sales increased by 50 percent in the second quarter of 2010 versus the same time last year, according to Gartner, a leading tech research company.

At the same time, advances in mobile devices have spawned a new generation of Silicon Valley entrepreneurs.

Kleiner, Perkins Caufield & Byers, the giant technology venture capital firm, set aside $200 million this year for products that build upon the iPhone, iPod Touch and iPad.

"Welcome to the brave new post-PC era where a swoosh of fluidity replaces the traditional mouse. ... A new, truly revolutionary platform is rare, and a prize for entrepreneurs," firm partner John Doerr said in a press release.

Some media companies, including CNN, see an opportunity to make a mark on these emerging platforms.

"Mobile news is a fertile ground for growth and innovation," said Louis Gump, vice president of CNN Mobile. "We know a lot of people want to get news on phones."

Nielsen data show that CNN, which leads the mobile news category, has more than 14 million unique mobile users a month.

Users also tend to keep coming back. According to CNN data, the vast majority of consumers who download the CNN app for iPhone are still using it a month later.

Khotari, who only a few months ago was in graduate school, still can't believe he stumbled into the news business.

"The first thing we were thinking is, we're spending a thousand dollars to get two iPads. Will we be able to recover that? Our goal was to sell a few of these apps and at least recover that," he said.

Despite their sudden success, the two entrepreneurs haven't allowed themselves many splurges yet. In fact, Gupta has yet to purchase an iPhone 4.

"I'm waiting for my upgrade window from AT&T," he said.