Why phones need to know where you are 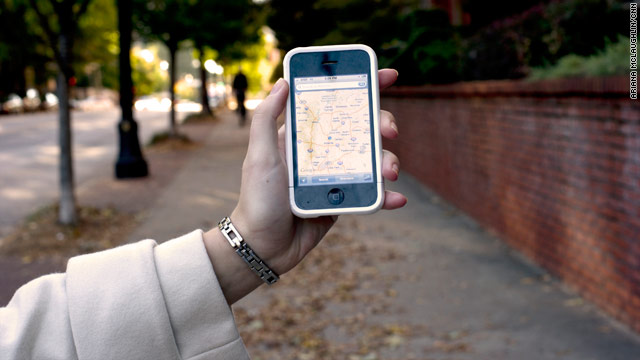 Well, that's a personal question, isn't it? But it's one our smartphones ask us constantly.

Whether we're aware of it or not, nearly all of these pocketable gadgets -- from iPhones to Droids -- are fitted with a collection of sensors designed to tell the phone and a host of apps where we are and what we're doing.

The main sensor, GPS, uses satellite data to triangulate our positions on global maps and can help with driving directions in unfamiliar cities or neighborhoods. The accelerometer feeds the phone information about how we're tilting the device. Digital compasses orient us to the global magnetic poles.

On one hand, all of this data can seem a bit scary. New phone software -- including Apple's iOS 4, which is used on newer iPhones -- allows these sensors to collect and transmit information about us constantly. A handful of privacy-minded groups say this will put too much of our lives out in the open, or at least provide too much data to app developers and mobile phone companies.

But others see the location-aware society as a revolution.

When gadgets know where we are, they unlock many new services.

There are many reasons to fall for someone, and location -- read: convenience -- might just be one of them. Trying to capitalize on this idea, smartphone apps like Skout (a general singles site) and Grindr (which is geared to gay men) let people see the photos of potential mates who are within a certain radius of them at that very moment. See someone you like who's nearby? You can message them through the apps.

One problem with being a good local citizen: After you see that pothole or broken-down subway car -- which you were obviously going to report -- it's so easy to forget where you saw it. (Um, that was north of here, right?)

Cue a new set of "Gov 2.0" apps designed to help you point out flaws in the city system, geotag them with exact coordinates, attach a picture, and pipe them to city hall. SeeClickFix and CitySourced are worth checking out. Also search the app stores for your city's name and 311. That may pull up a local version.

Long day in the office? No one wants to waste valuable drinking time looking for the watering hole with the best happy hour, only to find that it's far away. Find the cheapest drinks near you at this very moment with a set of smartphone apps from Boomtown Apps. The company produces happy-hour apps for several major U.S. cities. The Mixology app has a bar map, too, and it also includes drink recipes in case you just want to pour that Old Fashioned at your desk.

Meet up with nearby friends

When people first hear about the idea of using phones to "check in" to locations, they often cringe. Why would you want to tell the world where you are at every moment? Well, according to Foursquare founder Dennis Crowley, that information enables all sorts of serendipitous interactions. If you see that a friend is at the bar around the corner, you might just go join him or her.

Learn about your city

It's hard to know much about your city if you're just reading about it on the internet. But several apps combine a wealth of trivia with mapped-out tours and even local scavenger hunts to help you explore the place where you live.

SCVNGR, for example, is full of "treks" and other location-based challenges, where users can earn points, and even prizes, for checking and taking pictures. Check out the Freedom Trail route in Boston, Massachusetts, or the tour of downtown Philadelphia, Pennsylvania, for an idea of what these local tours entail.

Say you're on a business trip in a new city. You don't know anyone. Where should you eat? You could look at a newspaper or online, but good luck guessing how far away those addresses are. Instead, a number of foodie smartphone apps combine restaurant reviews with maps, so you can find good food that's nearby, too. Yelp! and urbanspoon are two of the most popular.

Sweat off some pounds

Information sometimes leads to action, and seeing the routes you've been running lately can be a big boost of confidence to keep up your workout routine. Apps like RunKeeper give you this sort of maps. And when you integrate RunKeeper with Foursquare -- the check-in app -- you can earn digital badges for running especially long distances. Marathon anyone?

A new set of "augmented reality" apps aims to add a layer of information to the real world, based on what's nearby at the time. An app called Wikitude, for example, lets you choose sets of data -- Foursquare locations, YouTube videos, Flickr pictures, Wal-Mart stores -- and then plots those points on top of an image of the real world, as seen through your phone's camera mode. It's like those Terminator Glasses -- but through a phone.

Gone are the days when penciled notes on the back of family photos were the only way to tell when and where a picture was taken. Many apps these days, from Flickr to Picasa, "geotag" photographs when they're uploaded, meaning they're automatically stored on a map. A new app called blacktop lets users pair those photos with Foursquare check-ins to create a map-based photo essay.

It's only a prototype at this point, but researchers at Intel Labs in Berkeley, California, have installed air pollution detectors on a mobile phone in the hope that people could log air quality measurements as they move about the Bay Area. The data would be tagged to a map, of course, so researchers would be able to see which streets or neighborhoods are the least lung-friendly.