The 10 most annoying smartphone habits 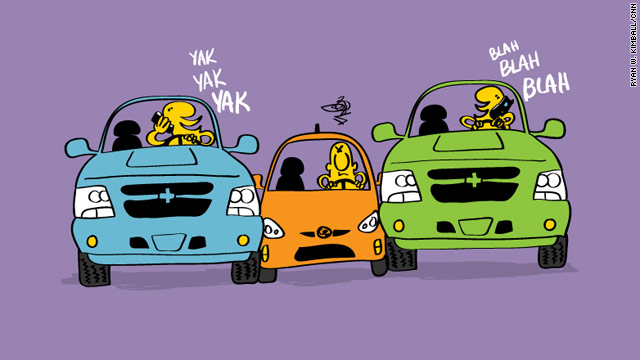 Drivers chattering on their phones are just one of the many annoying things about smartphone users.
STORY HIGHLIGHTS

(CNN) -- In the ever-growing world of smartphones and smartphone users, one thing has become fairly clear: We all love our own phone, but we hate yours.

Smartphones have changed how many of us communicate. They also can drive us crazy -- not because of our own perfectly acceptable behavior, but of the irritating habits of the uncouth hordes around us.

Here, in no particular order, are the 10 things that drive us most crazy about smartphones and the people who love them.

[The fine print: Nothing in this list is intended to suggest the author and his colleagues are not guilty of some of these transgressions from time to time.]

It's an oldie but a goodie.

Thursday: More users are ditching their desktops or TVs for the ease of basic computing on phones

Someone cuts you off on the highway. They nearly rear-end you into a Circle K. They're swerving like Mel Gibson on the way home from a kegger at David Hasselhoff's place.

If it's just because they're bad drivers, we only have a limited amount of factual data to use during our profanity-laced outburst. But if they've got a phone awkwardly pressed to their ear because they're too important to wait (or use a headset), we've got something tangible to rage against.

You got a free headset with the phone. Use it. Or at least watch the road while you're talking.

You know that fake movie trailer where the person using their phone ruins the movie? They're talking to you.

And it's not just talking anymore.

Every time you pull out the phone to text your buddies about how Shia LeBeouf is chewing up the scenery, your glowing, teal LCD beacon shines in someone's eyes and says, "Hey, you weren't watching the movie, were you?"

Get five or six text-happy, Roger Ebert wannabes together at the same time and it's a veritable laser light show. Please stop.

The Bathroom Stall Texter (or Talker)

Don't get us wrong. We love a little healthy debate about the pros and cons of various gadgets and gizmos.

And lots of techies have valid reasons to like their hardware, their operating systems and their particular phone's features more than others.

But does that really make someone who prefers a different product technologically illiterate scum?

The "iCrap?" Come on. And if someone doesn't like your iPhone, is it really because they're just jealous?

And heaven forbids that somebody says out loud that they actually like their BlackBerry.

A little good-natured back-and-forth is one thing. An hourlong diatribe about the evils of the Apple operating system is another. And won't help you get invited to the next party.

Three couples are enjoying a tasty breakfast. Between bites of an egg-white Denver omelet, FIRST HUSBAND reaches into his pocket for a smartphone. He taps away at it for a few seconds then places it on the table.

A moment passes. Then SECOND HUSBAND pulls a smartphone from his pocket. He taps away quickly, nervously, then pockets his phone. Seconds pass. FIRST HUSBAND again grabs his phone and starts thumbing its glowing touchscreen.

"Are you two playing Words With Friends at the table?"

Waiting for the Next Big Thing

A first cousin of the Social Situation Drop-out, the Next Big Thing isn't actually using their phone while you're hanging out. At least not all the time.

But it's never quite put away either. The phone sits face-up on the table or bar, within arms' length, and this digitally distracted type is always glancing down at it, ready to snatch it up the next time a text, call or e-mail pops up.

Translation: "Sure, I'm hanging out with you. But I live in constant hope that the next tweet I get will be more interesting."

OK, we admit it. If you have just the right fashion sense to go with it, your Bluetooth can make you look like an awesome sci-fi movie cyborg.

But remember, to half of the world, you just look like you're jabbering away to no one in particular.

If you're walking, it makes it awful hard to tell the difference between you and a raving homeless person. And if you're sitting next to us, say in a restaurant or on the subway, listening to you have a one-way conversation into the void is just annoying.

The 'App for That' Joker

OK, it was a very effective marketing campaign.

But a year and a half later, it's no longer funny when you say "there's an app for that" every time you're in a conversation about ... you know ... something for which there is an app.

It's gotten as predictable, and painful, as somebody crooning "The Gambler" at every poker night.

(By the way, we're not claiming to be totally blameless here, and most of our journalistic brethren can't either).

We would like to tell you that, now that Apple has trademarked the phrase, it's illegal for you to repeat it and think it's funny.

It's not true. But we would like to tell you that.

It's cool to have the internet in the palm of your hand.

But does that mean you should use it stealthily at your team trivia showdown to find out who holds the record for most extra-base hits in Major League history?

Not to mention whipping it out during exams (and, no, that's not just because we're bitter that smartphones didn't exist when we were in college).

You didn't set your phone to vibrate. Then you left it on your desk when you went to a two-hour-long meeting.

We, your co-workers, are sure you're proud that you downloaded the Tag Team classic "Whoomp, There It Is" as your ringtone. But it sort of hurts our brain to have to listen to a full minute of it before your call goes to voice mail.

If your phone gets ... um ... accidentally thrown against a brick wall, there's not a jury in the land that would convict us.

And that's our 10. Did we miss any? Let us know in the comments section.