Windows Phone 7 touches down in America 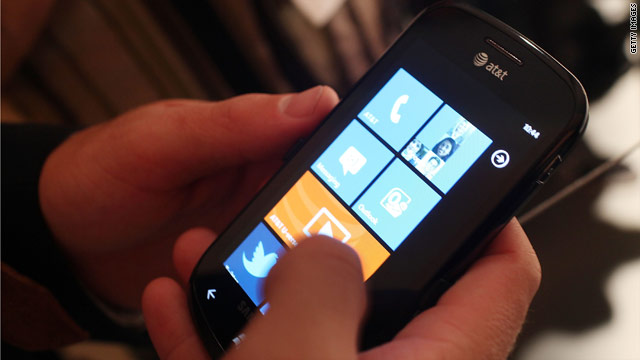 (CNN) -- Stretch out those fingers, because a new breed of touch-screen smartphones hits the U.S. and Canada on Monday.

The other newcomers are HTC's HD7, which has an even bigger screen and is showing up on T-Mobile USA's store shelves, and HTC's Surround, for sale by AT&T. All three models cost about $200, with a two-year wireless contract.

More Windows Phone 7 devices from Dell, LG, Samsung Ericsson and others are in the works. Phones for Verizon Wireless and Sprint Nextel are slated for next year.

Microsoft is waving goodbye to its outdated, stylus-focused Windows Mobile software, which emerged as a leader years ago in a younger, less competitive smartphone market.

Now the software giant is angling to regain market share it has ceded to Google's Android and Apple's iPhone touch-friendly products. Even Research in Motion, long known for business-oriented phones that emphasize e-mail, is reinventing its BlackBerry line with the Torch and Storm.

A couple of weeks ago CNN tested two preproduction handsets running finished versions of Windows Phone 7. The system is snappy, attractive and brings some unique stylistic effects and tools to the smartphone realm. Much like Android's integration with things such as Google Calendar and Gmail, Windows Phone 7 moves data seamlessly between Microsoft's Xbox Live game service, Hotmail and Office programs.

Early reports suggest sales there have been stronger than expected, resulting in some carriers experiencing shortages of phones. That could affect availability of these devices in the U.S. this week.

Many other app makers are waiting to see if Microsoft's system passes the "smell test" with peers and consumers. Pandora, the popular radio service, doesn't have an app yet, but Chief Technical Officer Tom Conrad seems convinced.

"I think Windows Phone 7 is great," he said at a conference recently.

Are you planning on buying a Windows Phone 7 device? Why or why not? Let us know in the comments below.