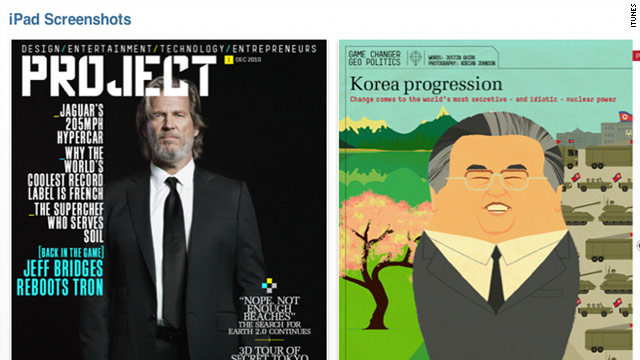 The first issue of "Project" includes a profile of "Tron" actor Jeff Bridges and a look at politics in North Korea.
STORY HIGHLIGHTS
RELATED TOPICS

(CNN) -- "Project," an iPad-only magazine from Sir Richard Branson's Virgin Media, debuted Tuesday, and Branson -- with typical flair -- called it no less than the future of publishing.

The "Project" app launched in the Apple store Tuesday. The downloadable app itself is free, while the monthly digital magazine will cost $2.99 per issue.

Branson said the app will be Apple-only in the near term (an iPhone app is in the works), but not forever.

"I think the relationship with Apple will run very deeply, but I think Apple accepts that we won't forever just be on the iPad."

The first issue of the magazine showcases the iPad's multimedia abilities.

For an article on "Tron" actor Jeff Bridges, background music plays as an animated image of Bridges spins and the actor makes various faces.

The launch comes amid reports that rival media mogul Rupert Murdoch is preparing a daily newspaper for the iPad. The publication will be called "The Daily" and sell for about $1 a week, according to Women's Wear Daily, which reported the story earlier this month.

"I think a daily can survive. If they're clever and they use the app well, I think they can bring a newspaper alive as well," he said. "But with 'Project' we can do a lot more than a daily can do .... they are two very different things, a magazine and a newspaper."

"Project" writer Chris Bell, however, was less diplomatic on the magazine's blog, jamming more shots at Murdoch into one paragraph that would seem humanly possible.

"As 'Project' went on sale, reports emerged that Rupert Murdoch will soon launch an iPad-only newspaper called The Daily, after it came to him in a dream or something," Bell wrote. "Which, like all Murdoch products, shall doubtless enrich humankind with its impartial political analysis and rolling coverage of [expletive] exploding. Also: hi-def nudity, fingers crossed.

"But the point stands: the irascible Aussie despot doesn't throw his corked hat into the cyber ring until he's sure of a market. Apart from the Times paywall, maybe. And MySpace. But, well, you know."