Why is FCC's 'net neutrality' order still a secret? 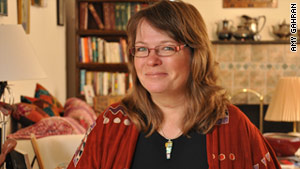 Amy Gahran says she believes there is a lack of transparency around the "net neutrality" order.
STORY HIGHLIGHTS

This FCC order would require internet providers to allow access to all kinds of legal Web content. And it also would reportedly make it harder for broadband internet access providers to slow delivery of some kinds of internet content while putting others on the fast track.

Most importantly: Net neutrality requirements reportedly would not apply to mobile devices (such as cell phones or tablets) that connect to the internet via wireless carriers such as Verizon or AT&T.

This is a huge concern since mobile devices are fast becoming the most popular way to access the internet in the U.S. and around the world. Regulations that apply only to wired networks would, in effect, ignore the wireless future.

I said "reportedly" above for a crucial reason: As of early Tuesday (and despite ample mainstream news coverage of the vote) no one outside of the FCC had seen the final draft of the order. The FCC has not posted this document to its website, nor has the latest draft of the net neutrality order been leaked.

In fact, FCC officials said Monday that the final order won't be published until "several days" after the vote. GigaOm explained that FCC claims this delay is because the agency must "address any dissenting views from the commissioners in the order."

The bottom line is: The public, which will be affected by this order, is not yet allowed to see exactly what it says before the vote. We'll only find out what it requires (or not) after it's a done deal. Also, the final version of the order could differ substantially from the proposed rules published October 22.

This month in Forbes, Elizabeth Woyke explored this question: Does the public have the right to see the FCC's net neutrality proposal? "Net Neutrality probably ranks as the most controversial issue in the communications sector right now," she writes. "The FCC's policies will have the power to affect both how the average consumer experiences the internet and the future of the multi-billion-dollar telecom industry."

What is 'net neutrality'?
RELATED TOPICS

Nevertheless, the issue of net neutrality has long faced a serious obstacle to general awareness and understanding: massive eye-glaze potential. Net neutrality sounds abstract, technical, and boring -- so it's hard for typical consumers to grasp how it might affect them.

From a consumer's perspective, here's the 800-gorilla lurking in the new net neutrality regulations: Tuesday's order probably would create some net neutrality protections for people who access the internet on a computer via a cable modem or other "wired" connection.

However, if wireless networks don't have to play by those same net neutrality rules, then in the next few years mobile users may well see their internet options become both more limited and expensive.

This isn't merely a concern for the 17%-25% of Americans who currently use smartphones. Nearly a year ago, Gartner predicted that by 2013 "mobile devices will overtake PCs as the most common Web access device worldwide." So if mobile is exempted from U.S. net neutrality requirements, those protections would not apply to how the majority of Americans soon will be getting online.

Such an omission would leave the door open for wireless carriers to start doing things such as charging their customers extra for mobile access to services such as Facebook or YouTube or even charging you for each mobile Web page you download.

Fortunately, it's not all doom and gloom on the mobile front. The order might offer some new consumer protections for wireless internet users, too.

According to GigaOM, FCC officials said in Monday's press conference that the new net neutrality order would include "robust transparency requirements for wireline and wireless networks, and a rule preventing both wireless and wireline carriers from blocking websites. On the wireless business the focus will be on preventing mobile operators from blocking services that compete with their own voice or video services."

The distinct lack of transparency around the net neutrality order flies in the face of the FCC's own high-profile Reboot FCC initiative, which claims to focus on reform through "citizen interaction and participation, usability, accessibility, and transparency across the agency."

This irony did not escape the notice of Alex Howard, who covers Web policy issues for O'Reilly Media.

"The FCC has fallen short of its transparency pledge," he said. "I have not found a legal precedent that explicitly gives the agency authority to keep the text of a proposed rule secret until it is voted upon by the Commission. While it is true that conversely the FCC does not appear to be under no legal obligation to do so."

Howard also noted that since commission members presumably had to negotiate on the rule's final details, keeping those details out of the public eye may have made those behind-the-scenes negotiations "more flexible." Still, he said, "The choice not to post the proposed rules online before the vote is an example less government transparency in the creation of important regulation, not more."

Telecom industry analyst Peter Pratt has been following this issue closely on his blog Stimulating Broadband. He's submitted a Freedom of Information Act request to see the final order but so far has not obtained the document.