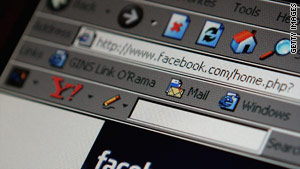 A federal magistrate found that a high school student has a constitutional right to criticize her teacher on Facebook.
STORY HIGHLIGHTS
RELATED TOPICS

Miami, Florida (CNN) -- A former Florida high school student who was suspended by her principal after she set up a Facebook page to criticize her teacher is protected constitutionally under the First Amendment, a federal magistrate ruled.

U.S. Magistrate Barry Garber's ruling, in a case viewed as important by Internet watchers, denied the principal's motion to dismiss the case and allows a lawsuit by the student to move forward.

"We have constitutional values that will always need to be redefined due to changes in technology and society," said Ryan Calo, an attorney with Stanford Law School's Center for Internet and Society.

"The fact that students communicate on a semi-public platform creates new constitutional issues and the courts are sorting them out," Calo said.

Katherine Evans, now 19 and attending college, was suspended in 2007 from Pembroke Pines Charter High School after she used her home computer to create a Facebook page titled, "Ms. Sarah Phelps is the worst teacher I've ever met."

In his order, Garber found that the student had a constitutional right to express her views on the social networking site.

"Evans' speech falls under the wide umbrella of protected speech," he wrote. "It was an opinion of a student about a teacher, that was published off-campus ... was not lewd, vulgar, threatening, or advocating illegal or dangerous behavior."

Matthew Bavaro, an attorney with the American Civil Liberties Union who is representing Evans, was pleased with the ruling.

"The First Amendment provides protection for free speech regardless of the forum, being the Internet, the living room or a restaurant," he told CNN.

On the Facebook page created by Evans, which included a picture of her teacher, Evans wrote: "To those select students who have had the displeasure of having Ms. Sarah Phelps, or simply knowing her and her insane antics: Here is the place to express your feelings of hatred."

According to court documents, Phelps never saw the posting, which was made from a home computer after school hours.

After receiving three comments from people who criticized her and supported the teacher, Evans removed the page from Facebook.

School principal Peter Bayer suspended Evans, an honor student, for three days for disruptive behavior and cyberbullying of a staff member. Bayer also removed her from Advanced Placement classes and assigned her to regular classes.

Bavaro, Evans' attorney, is seeking to have the court find the school's suspension invalid and to have documents related to the suspension removed from her school file.

"It will eliminate any official public record and validate her rights, since her First Amendment rights were violated," he said.

Internet experts say the court got it right, and that the ruling shows the law evolving with society.

"It reassures Internet users and students that they can still speak their mind," Calo said. "Its not a security issue. Its personal opinion and gossip."

Calo believes high-profile campus shootings at Columbine and Virginia Tech have made schools more security conscious. But in this case, the principal went too far, he said.

"I think this is just an example of an overreaction on the part of an administrator to speech outside the classroom," he said.

"It's one thing to use that information to identify illegal or dangerous conduct. It's quite another to punish opinion and speech outside the classroom that doesn't disrupt the activities of the classroom," he told CNN.

Bavaro said Evans is not granting media interviews at this time. He said she is not seeking to get rich from her lawsuit.

"We are only seeking nominal, token damages. Maybe $100. Some token amount to show that her rights were violated," he said. This case is not about money."

An attorney representing Bayer, the school principal, did not return CNN's calls for comment.