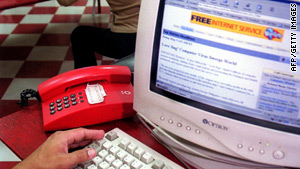 By 1995 the number of dot-com Web sites had reached 18,000.
STORY HIGHLIGHTS
RELATED TOPICS

(CNN) -- These days, when everyone seems to have a Facebook friend, is LinkedIn or can Google themselves, it's hard to remember the old days, before the dot-com revolution.

Having a domain name made it simpler for the average person to access a Web site. Instead of having to remember a long series of numbers and dots, you could type in ATT.com, IBM.com or CNN.com.

But from those humble beginnings the Internet has grown to more than 80 million dot-com domain names, according to the Information Technology & Innovation Foundation (ITIF).

Crunching the numbers, 99.9 percent of all Internet growth has occurred over the past 15 years.

"The global diffusion of the commercial Internet has occurred with astounding speed," says the ITIF report "The Internet Economy 25 Years After .Com." "Every country on Earth, developed and developing alike, has adopted the Internet."

The impact on the U.S. economy of the Internet sector is estimated at $300 billion or about 2 percent of the total, according to a report issued by Hamilton Consultants and the Harvard Business school last year.

The expansion of the Internet hasn't been without its growing pains. The dot-com bubble burst in the early 2000s, taking billions of investor dollars with it, and fraud has been growing, tripling over the past five years, according to Internet Crime Complaint Center.

"The figures contained in this report indicate that criminals are continuing to take full advantage of the anonymity afforded them by the Internet," said Donald Brackman of the National White Collar Crime Center. "They are also developing increasingly sophisticated means of defrauding unsuspecting consumers. Internet crime is evolving in ways we couldn't have imagined just five years ago."

The scams range from the ubiquitous e-mail scheme where someone needs help getting money out of countries such as Nigeria to nondelivery of online purchases.

But despite the downside, the ITIF sees a bright future for the Web.

Not only for conducting business, but for the sharing of information, provided online security is maintained and the Internet is expanded throughout the globe.

"So to the commercial Internet, congratulations on hitting your 25th birthday; you're just starting to enter the prime of your working years," the ITIF said.