Cars of the future to power themselves

By Agnes Teh for CNN 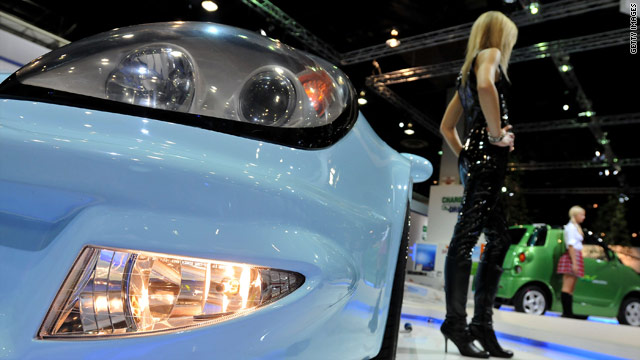 Could cars in the future draw power from their roofs, bonnets or even doors?
STORY HIGHLIGHTS

London, England (CNN) -- A car able to run solely on power generated from the material in its roof or door could offer a sustainable alternative to other eco-friendly motoring solutions, researchers say.

Scientists at Imperial College London are working with car manufacturer Volvo on a $4.6 million project to develop a new material that could store and discharge electricity in future hybrid vehicles.

"The car of the future could be drawing power from its roof, its bonnet or even the door, thanks to our composite material," said Dr. Emile Greenhalgh, project coordinator from Imperial College London's Department of Aeronautics.

The prototype consists of carbon fibres and a glass fibre which allows the material to store and discharge large amounts of energy. When the device is plugged into a power supply, it creates a current like a normal battery would. Essentially the car acts as its own battery.

The material is a supercapacitor, similar to those used in electrical circuits -- and only takes 10 to 15 seconds for it to be fully charged, according to the scientists.

"We are aiming to produce a 15 percent weight reduction," said Dr. Alexander Bismarck who works alongside Greenhalgh. "The structure would be lighter so that would mean you could drive further."

He predicted the weight reduction could improve the performance of future hybrid cars. "If we are able to reduce the overall weight of a car, it should be possible to increase its top speed and accelerate faster," said Bismarck.

He added that the material could, in future, be used in other objects."You might have a mobile phone that is as thin as a credit card because it no longer needs a bulky battery, or a laptop that can draw energy from its casing."

The car of the future could be drawing power from its roof, its bonnet or even the door
--Dr. Emile Greenhalgh
RELATED TOPICS

During the three-year project, researchers hope to develop material that will replace the metal flooring in the car boot. They say making a wheel well out of the composite material could allow Volvo to reduce the number of batteries needed to power the electric motor.

This breakthrough invention is also good news for the environment. A lighter vehicles means "cutting down fuel which reduces our carbon footprint," said Bismarck.

He added that the U.S. and British military are "interested" in how the material could be applied to high power weapons and reactive armor.

The University also has plans to take the project further -- by looking into how the material could apply to airplanes.