Tigers on verge of extinction in the wild, World Wildlife Fund warns 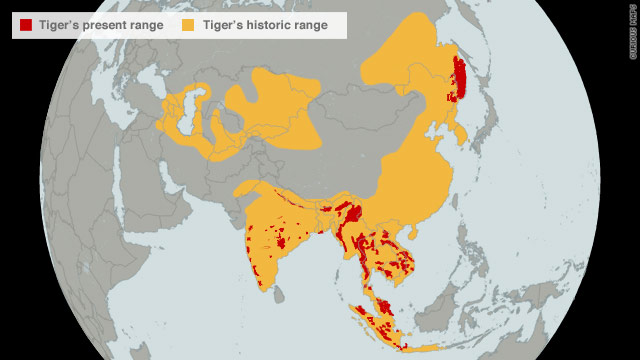 The World Wildlife Fund says there are now more tigers in captivity in the United States alone than there are in the wild worldwide.
STORY HIGHLIGHTS

(CNN) -- Tigers could become extinct in the wild in less than a generation, the World Wildlife Fund warned Wednesday as it launched a campaign to save them.

The number of tigers in the wild has dwindled to 3,200 -- less than the number held in captivity in the United States alone, the campaigners said.

"There is a real threat of losing this magnificent animal forever in our lifetime," said Sybille Klenzendorf, director of the WWF-US species conservation program. "This would be like losing the stars in the sky.

"Three tiger subspecies have gone extinct, and another, the South China tiger, has not been seen in the wild in 25 years," she told reporters.

"Unless we really crack down on illegal trade and poachers, tigers in the wild have very little chance," said a World Bank official involved in the campaign to save the big cats.

Keshav S. Varma, program director of the World Bank's Global Tiger Initiative, said the fate of tigers would show how serious people were about protecting wildlife. 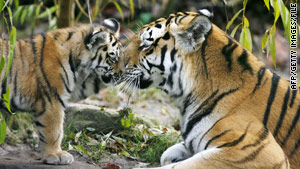 There are more tigers in zoos than in the wild, the World Wildlife Fund says.

"If the tigers disappear, it is an indication of a comprehensive failure," he said. "It's not just about tigers. If you save the tiger, you are going to save other species. It provides an excellent indicator of commitment to biodiversity.

Tigers are threatened by many factors, including "poaching, habitat loss, poorly planned development and illegal trafficking," the WWF said in a statement. "And there are few regulations to keep those tigers from ending up on the black market."

Demand for tiger parts in areas of Asia is a key factor, campaigners said.

"The demand for bones and skin, meat, and even claws and teeth ... is driving a major crime campaign to wipe tigers out in the wild," said Crawford Allan, director of TRAFFIC-North America, which monitors the trade in wildlife.

He warned that in some parts of the world, tigers were valued more for their body parts than as living creatures.

The WWF is working with the American College of Traditional Chinese Medicine to fight the use of traditional remedies such as tiger bones.

"Traditional Chinese medicine does not need tiger bones to save lives," said Lixin Huang, president of the ACTCM.

"What we are dealing with is an old tradition, an old belief that tiger wine can make their bones stronger. That is not medicine, that is from old tradition," she said, adding that the group was spearheading a campaign to educate people about the threat to tigers.

The campaign launch is linked to the Year of the Tiger, which begins on Sunday in the traditional Chinese calendar, said WWF spokesman Lee Poston.

The World Wildlife Fund hopes to find ways to double the current population of wild tigers by the next Year of the Tiger in 2022, "so the next new year is a time for celebration and hope, as a new year should be," said Mike Baltzer, the leader of the group's Tiger Initiative.

To do that, the group needs the help of governments, and at least $13 million a year just for its highest priority sites, Klenzendorf said.

She said there was cause for hope.

"Tigers are a cat and can breed faster than prey and recover ... if we can protect them," she said.

On Wednesday, the WWF published an interactive map that shows 10 tiger trouble spots around the world, highlighting areas where development or legal loopholes have endangered tigers or destroyed their habitat.

Those areas are in Bangladesh, China, Europe, India, Indonesia, Nepal, Russia, the United States, Vietnam, and the Greater Mekong region, which stretches across Cambodia, China, Laos, Myanmar, Thailand and Vietnam.

There were about 100,000 tigers roaming wild at the start of the 20th century, the WWF said.