U.N. climate chief to stand down 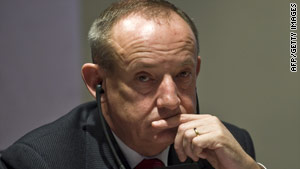 (CNN) -- The head of the United Nations climate change convention is leaving his post, a move that comes a few months after the Copenhagen summit.

Yvo de Boer, executive secretary of the U.N. Framework Convention on Climate Change, will be stepping down as of July 1, the UNFCCC said on Thursday.

"Working with my colleagues at the UNFCCC Secretariat in support of the climate change negotiations has been a tremendous experience," said de Boer in a statement on the UNFCCC Web site.

"It was a difficult decision to make, but I believe the time is ripe for me to take on a new challenge, working on climate and sustainability with the private sector and academia," he added.

He will be joining the consultancy group KPMG as global adviser on climate and sustainability and will be working with universities.

De Boer will remain in his current position until July 1 and help negotiations move forward ahead of the Climate Change Conference in Mexico in November.

De Boer warned last month that the world needed to do more to fight global warming.

"Copenhagen did not produce the full agreement the world needs to address the collective climate challenge," he said in a January 20 press conference summing up the results of the summit, according to the UNFCCC Web site.

"That only makes the task more urgent. The window of opportunity to come to grips with the issue is closing at the same rate as before," he cautioned.

Antonio Hill of Oxfam International praised de Boer's "perseverance as well as his uncompromising commitment to do what's necessary, not just what's easy," in a statement responding to the resignation.