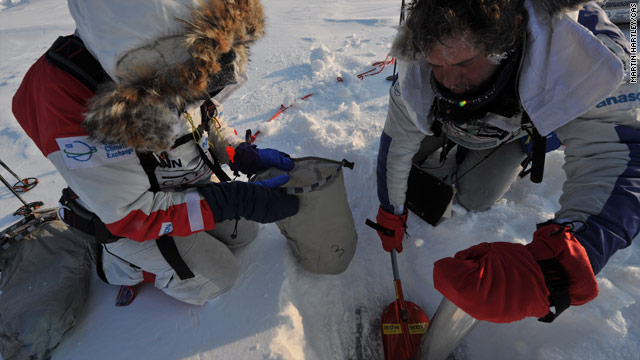 London, England (CNN) -- Two teams of explorers and scientists are on their way to the Arctic for the first international project to measure the amount of carbon dioxide in water beneath the ice.

Three British explorers will be airlifted to a remote location in the Arctic Ocean to start a 50-day trek towards the geographic North Pole in temperatures as low as minus 75 degrees Celsius, including wind chill.

A second team of international experts on ocean acidification will be working from a temporary ice base on Ellef Ringnes Island, on the edge of the Arctic Ocean near the Canadian coast.

Both teams will be drilling into the ice to collect water samples used to measure the amount of carbon dioxide in the water at various depths, according to the director of the Catlin Arctic Survey, arctic explorer Pen Hadow.

Read more about the explorers' challenge

"There is very little if any information about to what extent increasing levels of carbon dioxide in recent times has acidified the waters under the ice," Hadow said.

Oceans are believed to absorb around one third of the CO2 in the atmosphere, according to the Fourth Assessment report from the Intergovernmental Panel on Climate Change (IPCC).

Ocean acidification refers to the increasing acidity of sea water as carbon dioxide is absorbed from the earth's atmosphere. The ocean's acidity is measured by its pH level, which since 1750 has dropped by 0.1 units, according to the IPCC report.

Part of the team's research will include the permeability of sea ice to carbon dioxide and the likely impact the thawing of large areas of ice will have on future CO2 levels in the sea.

The last time the Catlin Arctic Survey team ventured into the Arctic, in 2009, they measured ice thickness and concluded that ice could stop forming over the Arctic Ocean during summer in as little as 20 years.

"The sea ice is looking like it's not going to be a year round feature in the next 20 or 30 years. So the lid is coming off an ocean which is suddenly able to absorb carbon dioxide in a way that it hasn't been able to before," Hadow said.

Zooplankton and phytoplankton will be exposed to levels of CO2 that some scientists say could be present in the oceans by 2100 if the world keeps emitting carbon dioxide at current levels.

"The prediction is that shell-based organisms will start to lose these shells because you're creating more carbonic acid in the water," said the survey's science manager, Dr Tim Cullingford.

A research paper published in the Nature Geoscience earlier this month suggested that oceans are acidifying at their fastest rate in 65 million years.

Researchers from Bristol University compared the current rate of acidification to a sudden rise in temperatures at the Paleocene-Eocene boundary.

Then, surface ocean temperatures rose by up to six degrees Celsius within a few thousand years causing "widespread extinction" of organisms living deep down on the ocean floor.

"The widespread extinction of these ocean floor organisms during the Paleocene-Eocene greenhouse warming and acidification event tells us that similar extinctions in the future are possible," said the paper's lead author, Dr. Andy Ridgwell.

The report said laboratory tests showed that lower pH levels in the sea could result in the dissolution of shells, slower growth, muscle wastage and dwarfism which could have knock-on effects on the whole ecosystem.

The scientists at the Catlin Arctic Survey ice base will include experts from Plymouth Marine Laboratory, the European Project on Ocean Acidification (EPOCA), Université Pierre et Marie Curie-Paris 6, Villefranche and Fisheries and Oceans Canada.

On their return in late April, the data will be distributed to about 13 organizations for examination worldwide.