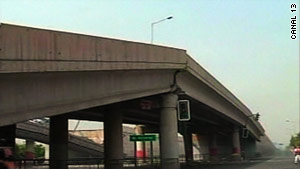 A 7.0-magnitude quake struck off the coast of Okinawa the same day an 8.8-quake caused massive damage in Chile.
STORY HIGHLIGHTS
RELATED TOPICS

(CNN) -- On January 12, a magnitude-7.0 quake struck Haiti just southwest of the capital, Port-au-Prince. On February 27, an 8.8-magnitude quake hit Chile near that nation's second largest city, Concepcion. That same day there was a 7.0 quake off the coast of Okinawa, Japan, and just this week a 6.4 quake hit southern Taiwan.

The Fact Check Desk looked at whether all of the seismic activity could be related. Fact Check: Is there any connection between the recent deadly earthquakes?

• Dr. Kurt Frankel of the Georgia Institute of Technology, who specializes in active tectonics, says that earthquakes are sporadic and unpredictable in nature.

• According to Frankel, the fact that these relatively strong quakes would strike around the same time is merely coincidence. Because the quakes did happen one after another, earthquakes are on people's mind, Frankel explained. "Had the quakes in Haiti and Chile not occurred recently, we might not have even been interested in the other quakes," he said.

• CNN meteorologist Chad Myers said earthquakes can trigger other seismic activity, but added that those four aforementioned events were too far apart in both time and distance to be connected.

• The U.S. Geological Survey on its Web site takes on the assertion that two major earthquakes in the same day must be related. Their answer: not likely. This is because Earth's surface is not rigid enough to transfer the stress over long distances. "There is evidence to suggest that earthquakes in one area can trigger seismic activity within a few hundred miles," they write. "There is also evidence that some major earthquakes manage to trigger seismicity over much greater distances (thousands of miles), but these triggered quakes are small and very short lived."

• The USGS estimates there are several million earthquakes each year and the National Earthquake Information Center locates about 50 quakes per day. However, large quakes measuring 8.0 and higher occur only about once a year on average. Bottom Line: While earthquakes can, and do, trigger other seismic events, the recent earthquakes in Haiti, Chile, Japan and Taiwan are not thought by experts to be connected.

Got something that needs checking? E-mail us at factcheck@cnn.com