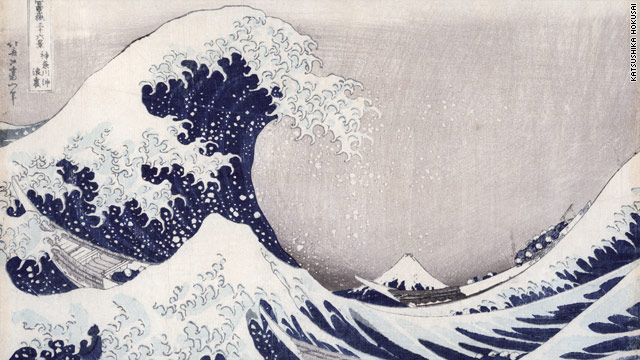 The 19th century print "In the Hollow of a Wave off the Coast at Kanagawa" by the Japanese artist Hokusai.
STORY HIGHLIGHTS

London, England (CNN) -- Cinemagoers will be familiar with the thrill of giant waves.

But what most people do not know is that the film "The Poseidon Adventure" was based on an incident involving the Queen Mary in World War II.

The famous liner was hit side-on by a giant wall of water while she was carrying 15,000 American troops to Britain in 1942. The ship listed to an astonishing 52 degrees and almost capsized.

More recently, "The Perfect Storm" will be familiar to most, providing an account of the sinking of the Andrea Gail south of Newfoundland in 1991.

Waves have been a source of fascination ever since mankind first gazed at the ocean, and the sea has been a favorite subject for many artists over the centuries.

Romantic artist William Turner painted many storm scenes including the Bell Rock Lighthouse off the coast of Scotland -- a building of considerable engineering interest and with a family connection to Robert Louis Stevenson of "Treasure Island" fame.

The 19th century print "In the Hollow of a Wave off the Coast at Kanagawa" by the Japanese artist Hokusai, showing a giant breaking wave about to engulf some unfortunate fishermen, is now re-interpreted almost daily in popular culture.

The open ocean in winter can be an unpleasant place. In 1995 the liner QE2 was en route from Cherbourg in France to New York when she was hit by a giant wave. Her captain subsequently described the encounter as seeing a wall of water "as though the ship was headed for the white cliffs of Dover."

The consequences of oceanic yacht racing in bad weather are regularly reported. There is nothing new in this: Joshua Slocum, the first man to sail single-handed around the world in the late 19th century, describes surviving a giant wave off the coast of Patagonia.

In fact there are remarkable similarities between the various accounts of seafarers' encounters with giant waves: Walls of water, a hole in the ocean, and a train of rollers. But what does modern research have to say about such descriptions?

First, such giant waves are rare, and seldom recorded by reliable oceanographic instruments. However, on January 1, 1995, a sensor on a platform in the central North Sea recorded a giant 60ft high wave crest, so "freak" waves are not just mariners' tall tales.

Such waves are thought to be very rare, but just how rare? What physics drives such waves? Is a "wall of water" plausible?

Computer simulations can now be made which incorporate much of the known physics of waves.

These can give information on the dynamics of giant waves and show that there is a tendency to form a high and long-crested event, which if steep enough, would match descriptions of a "wall of water."

Just as a wall is possible, so is a deep trench -- often described as a "hole in the ocean." Both can appear in simulations, it is simply a question of where the extreme event forms relative to the unfortunate observer. Such simulations are best visualized as computer-generated movies.

While computer simulations are possible, there is still the need for explanation and interpretation.

The simplest model to reproduce the basic properties of the simulations is the nonlinear Schrödinger equation -- an equation belonging to an area of applied mathematics investigated extensively over the last 40 years.

The basic process is related to the local concentration of energy that occurs when large waves form. Large waves move faster than small ones, causing a group of large waves to contract along the direction of propagation.

Like squeezing a tube of toothpaste, the energy is forced out sideways -- extending the length of the wave crests, and appearing to an observer as "a wall of water."

From the application of sophisticated mathematics we return to the real ocean.

It is important to appreciate that some degree of risk is inevitable. Large waves can occur and they may be larger than those a structure or ship is designed for.

Engineers and naval architects should not produce a design that will just survive the "design wave." Instead, designs should be robust -- able to survive, perhaps with damage, if waves greater than those anticipated should occur.

I described some work in this area in a lecture I gave in London in 2008, after which members of the audience came to tell me about their own encounters with giant waves on cruises in various parts of the world.