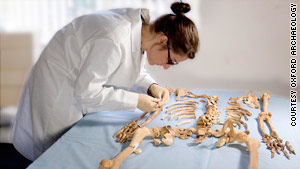 An analysis shows that many of the men suffered wounds thought to relate to the process of decapitation.
STORY HIGHLIGHTS

London, England (CNN) -- They were 51 young men who met a grisly death far from home, their heads chopped off and their bodies thrown into a mass grave.

Their resting place was unknown until last year, when workers excavating for a road near the London 2012 Olympic sailing venue in Weymouth, England, unearthed the grave. But questions remained about who the men were, how long they had been there and why they had been decapitated.

On Friday, officials revealed that analysis of the men's teeth shows they were Vikings, executed with sharp blows to the head around a thousand years ago. They were killed during the Dark Ages, when Vikings frequently invaded the region.

"To find out that the young men executed were Vikings is a thrilling development," said David Score, project manager for Oxford Archaeology, which excavated the remains. "Any mass grave is a relatively rare find, but to find one on this scale, from this period of history, is extremely unusual and presents an incredible opportunity to learn more about what is happening in Dorset at this time."

Radiocarbon dating had already placed the remains between A.D. 890 and 1030, before the Norman conquest of Anglo-Saxon England.

Scientists from the British Geological Survey then went further and analyzed the men's teeth to find out exactly where they were from. Isotope analysis of teeth can reveal clues about a person's drinking water, and in turn the climate they came from, said Jane Evans, an isotope geochemist at the survey.

"What we found was all of these guys came from a climate that had to be colder than Britain ... probably Sweden and Norway," Evans said by phone Friday. "One guy had such a signature of such a cold climate that he probably came from above the Arctic Circle."

The isotopes also show the men had eaten a high-protein diet, comparable to known sites in Sweden. It means the men were probably Scandinavian Vikings who were executed by Anglo-Saxons.

Evans and her colleagues at the British Geological Survey's NERC Isotope Geosciences Laboratory in Nottingham, England, analyzed 10 of the skeletons over the course of six weeks.

This is the best example we have ever seen of a group of individuals that clearly have their origins outside Britain.
--Jane Evans, an isotope geochemist at the British Geological Survey
RELATED TOPICS

"These results are fantastic," Evans said. "This is the best example we have ever seen of a group of individuals that clearly have their origins outside Britain."

Many of the executed men suffered multiple wounds, inflicted by a sharp-bladed weapon, to the skull, jaw and upper spine, all thought to relate to the process of decapitation, the Dorset County Council said.

Some men show evidence of other wounds, including a cut to the pelvis, blows to the chest and stomach, and defensive injuries to the hands, the council said.

There are also two examples of healed fractures that are unlikely to have been medically treated. In one case, the skeleton's right leg is 5 centimeters, or about 2 inches, shorter than the left, which would have given the person a pronounced limp, the council said.

The burial site was found during work for the Weymouth Relief Road, meant to ease traffic congestion on the highway to Weymouth, on England's southern coast. Weymouth Bay and nearby Portland Harbor will host the Olympic and Paralympic sailing events during the 2012 London Olympics.

The leader of the Dorset County Council, Angus Campbell, said the construction of the road had already revealed prehistoric and Iron Age finds.

"But we never would have dreamed of finding a Viking war grave," Campbell said in a statement. "The burial pit took us all by surprise and its story gets more fascinating as the analysis goes on."

Researchers are hoping to find further evidence about the men's lifestyles, activity, health and diet, the council said.