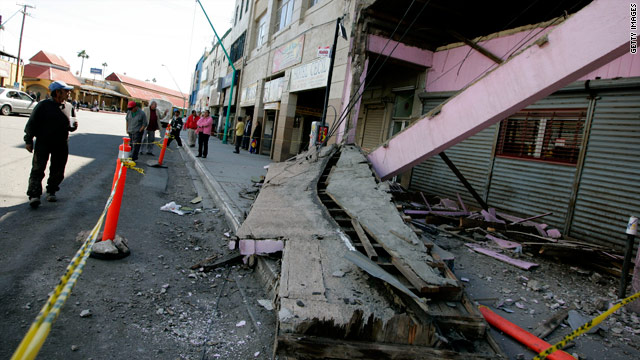 Residents survey the damage to a building after a magnitude 7.2 earthquake Monday in Mexicali, Mexico.
STORY HIGHLIGHTS

(CNN) -- Yes, it seems as if there have been a lot of strong earthquakes this year. And no, it's not a signal that the planet is coming apart at the seams, seismologists say.

The difference this year is not the frequency or strength of earthquakes, but their occurrence in or near population centers, the scientists say.

Major earthquakes in 2010 have caused death and destruction in Haiti, Chile, Mexico and Indonesia, and smaller ones have rattled nerves elsewhere.

"Natural processes become disasters only when they interact with people," said Seth Stein, a distinguished faculty member at Northwestern University in Evanston, Illinois.

Earthquakes the size of the magnitude 7.0 temblor that struck Haiti on January 12 occur 15 to 20 times a year, but almost all occur in oceans or sparsely populated lands, he said.

"Earthquakes of magnitude 7.0 or greater have remained fairly constant throughout this century and, according to our records, have actually seemed to decrease in recent years," the U.S. Geological Survey, which measures and tracks earthquakes all around the world, says on its Web site.

The USGS attributes our heightened awareness of earthquakes to a number of factors, including larger populations in more places, better global communication and media reporting, and a wider network of seismic detection devices.

Kurt Frankel, an assistant professor at the Georgia Institute of Technology, told CNN after the magnitude 8.8 earthquake in Chile on February 27 that there's nothing unusual going on.

"I'm sticking by my story," he said Wednesday. "It may be possible there's been a little bit higher frequency of these slightly larger earthquakes this year, but it's such a random process that there's not a connection between them."

The geologic record suggests lulls and increases in seismic activity -- at specific faults, not globally, he said.

"I really think that part of it is just our heightened sense of awareness given what happened in Haiti, with all the death and destruction there, and then the fifth-largest earthquake on record just a month later in Chile," he said.

"I would be cautious in trying to say there's an uptick in earthquake activity or anything like that."

However, he's open to scientific persuasion, noting that instruments have been measuring earthquakes for only about 100 years, "less than the blink of an eye over the geologic time scale."

"This is science, right?" he said. "We need to keep testing that hypothesis and other hypotheses, and maybe I will be wrong and my mind will change if these things keep happening."