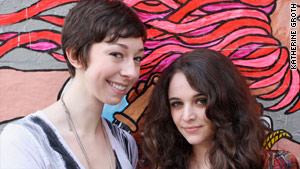 Editor's Note: Brenna Ehrlich and Andrea Bartz are the sarcastic brains behind humor blog and soon-to-be-book Stuff Hipsters Hate. When they're not trolling Brooklyn for new material, Ehrlich works as a news editor at Mashable.com, and Bartz holds the same position at Psychology Today.

(CNN) -- Twitter has become a vital tool over the past few years, allowing folks to chronicle everything from the Hudson River plane crash to performances of Romeo and Juliet.

A recent study from the University of Illinois at Urbana-Champaign suggests the microblogging site can improve relationships in RL (that's Real Life). But it's also become a venue by which people may -- to put it plainly -- overshare.

There's a big difference between tweeting about something personal in an interesting, relevant fashion (like when blogger David Chen live-tweeted his naturalization oath ceremony) and telling your poor Twitter followers every thought that crosses your cranium ("I like pigeons!" "Quarters are shiny!" "My left boob is bigger than my right!").

It can be tough to recognize when you're beating the TMI drum just a little too loudly -- the need for a reaction from your followers can often outweigh your better judgment -- but sometimes a simple edit is all you need to avoid the dreaded "unfollow."

The TMI tweet: "OMG! I'm going to Hawaii with my super hot GF & we're gonna lie in the sun!! #FYeahCruise!"

Why people hate you: Hmm, let's see: You're going on a freaking cruise while the average follower is sitting in a cubicle counting down the miserable moments until another sad Happy Hour with his/her single friends. Maybe people are, I dunno, jealous?

Twit fix: "Excited for a well-deserved vacay. Can anyone suggest must-see spots in Maui?"

If you share your joy while also asking for advice, you engage your followers, thereby alleviating the tedium of their comparatively bleak days. Be sure to tweet back at those kind enough to answer.

The TMI tweet: "I just ate a bagel, some chips and a Dr. Pepper. My tummy hurts."

Why people hate you: First, you said "tummy." Second, NO ONE CARES. Third, you're whining, and that's annoying.

Twit fix: "Just had a great wrap at Grey Dog Cafe in Manhattan. Get the marinated tofu -- healthy and delish."

If you insist on telling everyone what you had for lunch, at least have a good lunch. Moaning about pretty much any banal First-World problem on Twitter rates high on the annoying scale.

Instead, offer your readers some kind of value -- i.e. a fabulous alternative to the brown bag lunch Mom packed (yes, some of your followers likely still live at home).

The TMI tweet: "I just went on the best date ever with the hottest guy ever and I think I love him!"

Why people hate you: In this case, you're more likely to inspire fear rather than outright hate (unless your jealous ex follows you -- and he totally does). If your new love interest sees your tweet, it could come off as a little intense and scare him away. Plus, it sends a signal that you'll probably dish more sordid details as the relationship develops -- and no one wants his sex life to become a trending topic.

Twit fix: "For some reason I have this jam stuck in my head [insert link to ambiguously lovey-dovey song here]." (Tools like Song.ly and Blip.fm make this super easy.)

If homeboy happens to see this tweet, he will be sweetly intrigued. Also, you're providing your followers (remember them? -- the people who actually read your tweets because they care what you have to say?) with a new tune. Everyone wins.

The TMI tweet: "[Insert name here] is about as intelligent as that kid in pre-K who sat in the corner, eating googly-eyes and drooling on the teacher's shoulder."

Why people hate you: Ha. Your followers actually would love you for this -- [insert name here], not so much.

Twit fix: Twitter feuds are about as classy as vajazzling (which is to say, not at all.) Just refrain from getting out the claws, or if you must let your negative ions rip, limit your rants to an e-mail to your snarkiest friend (the one with whom you get frequent gossip hangovers).

Better yet, may we suggest creating a venomous blog complete with an alter ego? Hey, it worked for us ...