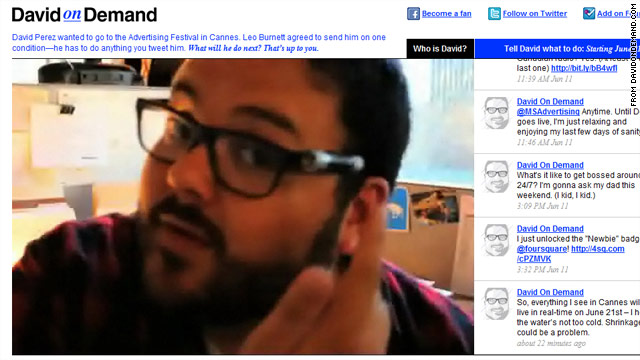 David Perez will start responding to demands on June 21 during an advertising festival in France.
STORY HIGHLIGHTS
RELATED TOPICS

If you go to his Twitter account -- @davidondemand -- and tell him to do something during that time, he'll do it, as long as it's legal.

You'll also be able to watch Perez's every move that week on a live webcam attached to his thick-frame glasses. So you won't have to take his word on the fact that he's following through with the Twitter commands. You'll be able to watch, in real time, as the internet turns him into a helpless puppet.

"Everything I see, you will see," the 29-year-old said in an interview on Friday. "And everything I do will be controlled through Twitter."

Wacky, voyeuristic, internet-enabled experiments like this -- whether they're publicity stunts or real attempts to connect people -- seem to be gaining popularity lately. It's been common for years for live webcams to stream images of a particular location -- Times Square in New York, for example -- over the internet, all of the time.

But real-time, first-person webcams are a somewhat newer idea, especially when they're left on for days.

Live cameras have shown up on the helmets of athletes, who now take television viewers down snowboard courses and onto football fields with them. Real-time cameras and Twitter updates have even worked their way into weddings. According to the blog ReadWriteWeb, a wedding on June 19 in Alabama will be broadcast live via webcam and with constant updates on Twitter.

Perez's situation is somewhat different, because not only will the internet be able to watch him, 24 hours a day, but it also will direct his actions.

He's the first to admit that this situation makes him a little nervous.

"I think I will have to do a lot of crazy things, and I'm terrified about some of them," he said. For example, Perez is afraid of heights, so some of his friends have teased him that they will tweet that he has to go parasailing that week.

"My mom is terrified," he said.

He's been thinking a lot about the logistics of this experiment, too. At night, he plans to put his glasses, and the live webcam, on a nightstand, facing away from him. "Who wants to watch me sleep?" he said.

And what about when he has to use the restroom?

"Obviously, no one wants to watch me pee, so I'll point [the glasses] toward the ceiling," he said.

The idea for "David on Demand," as the weeklong experiment is called, came out of a brainstorming session at the Chicago, Illinois-based advertising company, Leo Burnett, where Perez works. After hearing a pitch for the idea, a boss told Perez that he would get a ticket to the Cannes Lions International Advertising Festival in France only if he went along with the experiment, Perez said.

He was more than happy to oblige. Perez worked his way into and then up within the firm. He started as a barista down the street from the company, made his way in as a receptionist, and now works as a recruiter.

Not everyone is so thrilled about the concept. A writer for the Chicago Sun-Times says the experiment "can only be described as a stroke of unbridled tastelessness." Lewis Lazare says the firm Leo Burnett should not have attached its name to such a "trashy exercise in attracting attention."

Perez doesn't see it like that. The live webcam experiment is a chance to prove that advertising is becoming more personal and tech-enabled, he said.

"I was scared at first, but now I'm just really exhilarated," he said.

The webcam will be rolling during the advertising festival, so Perez said he hopes some people will be kind enough to let him go to conference sessions and mingle with important ad execs.

He even made a last-minute plea to this reporter for basic necessities.