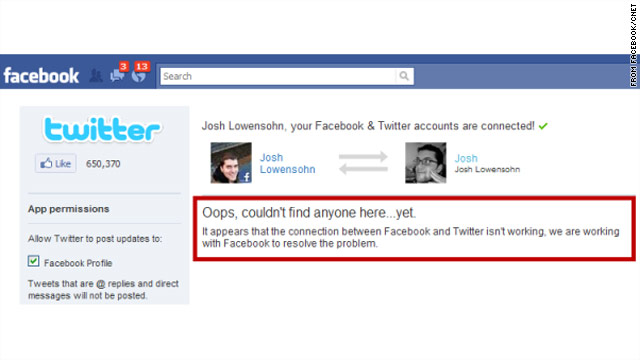 Now, trying to use the app on the popular social network brings up a message that says, "It appears that the connection between Facebook and Twitter isn't working," and that "we are working with Facebook to resolve the problem."

Prior to that, it had stated that Facebook "blocked" Twitter's application from doing a look-up of any user's friends list.

Twitter's Josh Elman, who posted about the new feature in the company's blog earlier on Wednesday, put out an update that says the problem is believed to be on Facebook's end.

A Twitter spokesperson later confirmed to CNET that the problem was due to Facebook putting a block on the application.

Earlier on Wednesday a Facebook spokesperson had reaffirmed to CNET that the two companies were, in fact, working together to "resolve the issue," though was unable to provide a timeline on a fix, or confirmation of the feature being re-enabled.

Facebook did a similar shutdown with Plaxo's Facebook application back in early 2008. Plaxo, which specializes in contact management, created a tool that would import data from Facebook into its own records in order to keep everything in sync.

Facebook quickly stopped the application from being able to aggregate data, as well as kicking out several users who had been alpha testing it, deeming it a violation of the site's terms of service.