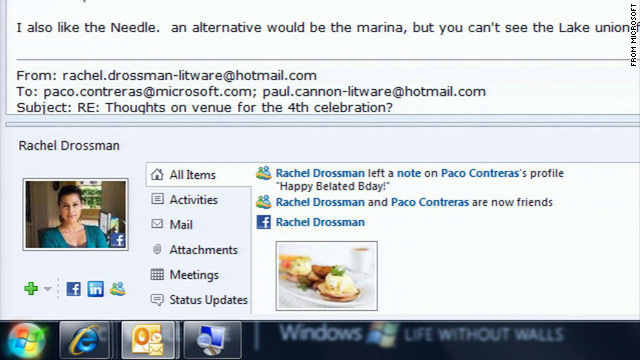 (Mashable.com) -- Microsoft is announcing today that it has integrated Facebook and Windows Live Messenger into Outlook, bringing the streams of millions of Facebook users into inboxes across the world.

Last year, Microsoft launched Outlook Social Connector, a plugin that syncs social networking feeds with your Outlook contacts, giving you immediate data on what they are doing and thinking. It started last year with LinkedIn integration, but soon the company announced MySpace and Facebook were coming.

Today, Outlook completes the cycle with not only Facebook integration, but support for Windows Live Messenger as well. Not only that, but the company is releasing the plugin for Outlook 2003 and 2007 users as well, bringing Facebook, MySpace, LinkedIn and Windows Live Messenger to millions of business and personal inboxes worldwide.

Last week, we got a sneak peek at the new Outlook at Microsoft's headquarters in Redmond, Washington. Here's what you can expect from the new Facebook integration, as well some features that you can expect in the near future:

Facebook and Microsoft worked together to get the launch of Facebook's integration in Outlook Social Connector right. Facebook's Strategic Partner Manager Rick Armbrust told us that they worked closely with the Office team to make the experience more social. One of the things he immediately highlighted was the pulling of Facebook profile pictures into Outlook.

The entire experience is a step above the Outlook-LinkedIn integration, which itself was pretty strong. Not only does it pull Facebook profile photos so that you can associate a name to a face, but it pulls the news feeds of your contacts into your inbox. When you're looking at someone's e-mail, you'll also get a glance at their status updates, picture uploads and wall posts, among other activities.

When you combine that with LinkedIn, MySpace, Windows Live Messenger, and Outlook data, you get a very detailed history of your interaction with your contacts, as well as an at-a-glance look at their activities and interests. Knowing that a potential client just returned from a trip to Hawaii can be all that you need to have the upper hand against your competition.

Microsoft Group Product Manager Paco Contreras told us that there's another new feature to the Facebook integration: realtime updates. Thanks to a new update to the social connector platform, also being released today, updates from your contacts will automatically be pushed to your inbox. There's no need to refresh anything: new Facebook status updates will pop up in realtime within Outlook.

The Facebook integration does have limitations, though: except for friend requests, Outlook can only pull data from Facebook. There is no "liking" posts or updating your status via Outlook, at least right now. Microsoft says that the next step is to provide a richer social experience by integrating the ability to push data to other social networks, improving the look and feel of Outlook Social Connector, and adding other social networks from other regions.

Microsoft has known for a while that social technologies are going to dominate the web. That was made evident by its $240 million stake in Facebook and its many partnerships and attempts at social media (some of which have bombed).

However, Outlook Social Connector has always felt like one of the company's smarter social media plays. Facebook's Rich Armbrust probably put it best:

"What's unique is that it's bringing social elements and context from Facebook form your colleagues and your friends into the Outlook experience, which is pretty unique given that there are so many that use Outlook as their primary communiction tool."

E-mail isn't inherently a "social" experience (it's not a one-to-many platform), and attempts at integrating social into the inbox (think Google Buzz) have mostly fallen flat. However, social data can be incredibly useful in the business world, especially when you need to understand what your client or colleague is thinking or doing right now. While we'd still love to see Twitter integration in Outlook, Facebook is far larger and, in most cases, has far more useful information.

Microsoft's also learned a few lessons from the privacy fiascos Facebook and Google have undergone in recent months. Outlook will only pull data from e-mails connected to Facebook accounts. If your business e-mail isn't linked to your Facebook, your data stream won't appear in Outlook Social Connector. It gives users a choice, although most people do choose to add their work e-mails to Facebook in order to join their company's Facebook network.

If you want to learn more about the announcement, Microsoft has also released a short video articulating Outlook's new features.