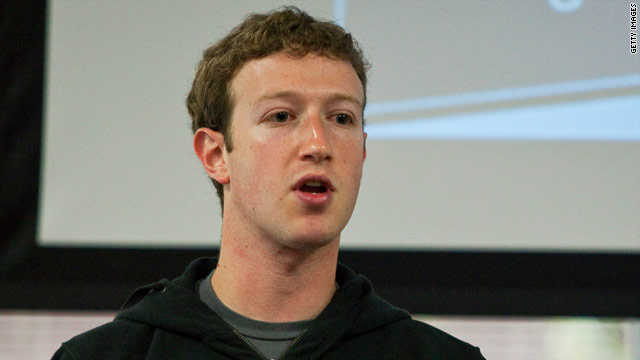 Facebook's founder and CEO Mark Zuckerberg has changed the culture of the world. Will his success last?
STORY HIGHLIGHTS
RELATED TOPICS

(Wired) -- Facebook is primed to announce this week that it's amassed a half billion active friends, a milestone reinforcing its status as the king of social networks -- a company to be regarded with the seriousness and power (if not revenue) of Google, Apple, Yahoo and Microsoft.

Five hundred million and rising also makes it clear to anyone not paying attention that Facebook is no fad, that it is a cultural force shaping our collective culture. Even if you have no desire to ever set up a profile, you can't ignore it and you are now oddly defined in the negative and left out of the zeitgeist.

A service of that size won't disappear anytime soon, even if Facebook has hit its plateau in the U.S. But net users are fickle and the web's short history includes dozens of sites that were once high-flying that have either since died (Geocities), lost their luster (Yahoo) or faded into irrelevance (Friendster).

So how could Facebook lose its place at the center of the web?

A pack of college kids drunk on Free Software launched an open-source, federated alternative to Facebook called Diaspora. After collecting an astonishing $120K in donations, the group is knocking out code.

Meanwhile, there's other cool stuff going on, including OneSocialWeb, the Appleseed Project and WebFinger. Get enough of these open protcols into decent shape and someone is likely to build them into an improbably powerful stack. Research the LAMP stack, if you don't get my drift.

What might that look like? An elimination of the need for a centralized home and coordinator of social networking -- where your social profile lives wherever you want it to (as your e-mail does) and can interact with any other profile around the net, on your own terms.

While it sounds far-fetched, a recent poll suggests that people are as happy with Facebook as they are with their cable company, even if they do find it similarly indispensable.

There's rumors the search giant is hatching its own social network system, despite the fact that it's just not particularly good at social networking. Its Orkut social network has flailed and even seems to be losing its final two treasures, India and Brazil, to Facebook.

Google's take on Twitter, called Buzz, isn't bad, but it's not been much of a hit -- despite some fine features such as threaded coversations. And then it's got Wave and Google Talk, and Google Chat and Google Profile and Google pages and Google Docs.

I wonder if anyone has tried stacking any of those together over there in the Googleplex to create a place where people actually want to hang out -- the clear difference between a site like Facebook and a site like Google search.

3. Location-based services and the mobile device

With the stunning popularity of pocket computers -- starting with the iPhone, location-centric services such as Foursquare are gaining users at the rate that Facebook used to. Perhaps most importantly, they are figuring out ways to use the addictive mechanics of gaming to create services even more engrossing than Facebook.

To compete, Facebook has its own, very well-liked mobile app, and is set to expand how it interacts with the real world. But there's a real threat here that Facebook could get outflanked by clever kids not too much unlike themselves, who figure out how to create a more potent digital heroin.

For those who love dark horses or the old and familiar, there's always a chance that the world suddenly tires of their Facebook wall or virtual farming and decide to get off the net's grid entirely. Socializing will still be necessary, of course, so we'll see the return of sockhops, neighborhood restaurants and church socials.

As for written messages, the Postal Service is actually quite good at delivering hand-written correspondence anywhere in the States for a nominal fee. The photo postcard will be huge again. But since the Postal Service is proposing to cease Saturday delivery, its social networking service would be a weekday-only affair. Vive la Poste!

5. Overreaching on the part of Mark Zuckerberg

Facebook's founder and CEO Mark Zuckerberg has changed the culture of the world with his single-minded devotedness to making people share more information with more people.

In a world where software can determine culture, Zuckerberg's unwavering drive to make more and more of the details of our lives public by default has triumphed in nearly every instance over prevailing cultural norms -- with the glaring exception of the Beacon project.

But as with all visionaries, there is always the danger that in his attempt to lead his flock to the land of milk and honey, there will come a moment where he steps too far ahead, and the flock abandons the frontier for the pasture, leaving him alone and howling in the wilderness.