People posing, and talking, as their pets on Facebook 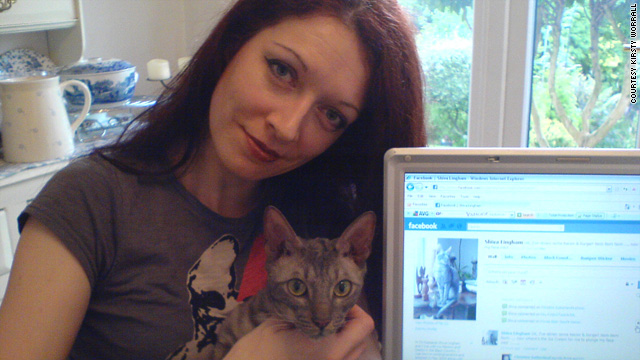 Kirsty Worrall created a Facebook account for her cat to keep friends and family up to date on Shiva's progress.
STORY HIGHLIGHTS
RELATED TOPICS

(CNN) -- There's nothing too unusual about the way Shiva Lingham starts her day. After a quick breakfast, she goes upstairs and crawls into her mom's unmade bed.

An hour or so later, a well-rested Shiva visits the family laptop to log on to Facebook and update her status. Only Shiva can't use the laptop alone -- she doesn't have opposable thumbs.

But then, most cats don't.

"Everybody seemed to be more interested in the cat than what me or my partner were doing," said Worrall, who doesn't have her own Facebook account. "I come from a family of huge cat lovers. They're fascinated with Shiva ... and they've been able to watch her grow through the Facebook page."

Worrall keeps Shiva's Facebook friends in the loop by posting photos of Shiva and updating her status in the third person to reflect what she's doing at that point in time. One recent status update reads: "Shiva Lingham is very upset that Mummy and Daddy have only been eating vegetarian food! ... Where's the Beef!"

Although exact numbers are hard to come by, Worrall is one of a growing number of pet owners who pose as their animals on social networks. A quick scan of Facebook yields at least a few thousand profile pages for dogs and cats along with less common pets such as birds, hamsters, ferrets, turtles, fish and rabbits.

Many of the profiles feature status updates from the animal's perspective, like this one posted by parrot Fruit Loop: "Fankyou everyone muchly for my wonderful Birthday msgs. Mumma ran out of Internet so I couldn't thankyou sooner.. My mumma made me some birdie muffins, yum yum. And I got a new toy! STOKED."

Or this update by a rabbit named Nestle: "Eat, poop, groom, sleep, repeat!!!"

These pet owners say it's all in good fun. But some may not realize they are violating Facebook's terms and conditions.

"People on Facebook want to interact with their real friends and the people they know in the real world," Facebook spokesperson Winnie Ko wrote in an e-mail to CNN. "Since accounts that impersonate anyone or anything can damage the integrity of this environment, Facebook doesn't allow fake profiles for pets."

Justin Smith, founder of the blog Inside Facebook, says it's not so much about the pets but the practice of assuming a false identity that "hurts the quality of communication" on the popular site, which has more than 500 million users.

"There are many places online where people assume identities of either people or, in some cases, pets. ... It's something we've seen with a lot of the first-generation social networks on the web," Smith said.

Instead of joining Facebook, pet owners might consider joining a social network specifically for pets, he said. Among them are Critterscorner.ning.com, Catster.com, Dogster.com and myDogspace.com.

There's even one for rabbits: BunSpace.

Jessica Frey, who operates a Facebook page on behalf of her rabbit Nestle, is aware of pet-centric networking sites such as BunSpace. But she says it's hard to make the switch after investing so much time in one social network and notes that Nestle has more than 1,000 friends on Facebook -- most of them furry.

Frey says some of Nestle's rabbit friends have had their accounts shut down by the site.

"It's really silly because we all know it's really not the pets that are doing it," she said. "It's the people behind them that are making friends with other people. It's pretty harmless."

Facebook did not respond to a question about whether the site removes pets' profile pages.

Nestle's Facebook page has enabled Frey to make friends with pet owners from around the world, she says. Her children's friends have all added Nestle as a friend on Facebook.

One person, however, remains immune to Nestle's social-networking charms.

"My fiance thinks I'm crazy," she said. "He doesn't like it at all. Every once in a while, I'll have Nestle say something to him on Facebook, and he'll just delete it."

Frey believes that for uncommon house pets, Facebook can be a lifesaver -- literally.

When Nestle began suffering from gastrointestinal stasis, a potentially fatal condition, Frey turned to her social network for help because "a lot of vets don't know too much about rabbits."

One Facebook friend answered her query, suggesting she medicate Nestle with gas-relief drops for infants. The bunny has been in good health ever since.

Worrall, who lives in Birmingham, England, agrees that Facebook can be a helpful tool. But she's much more interested in making new friends for Shiva. Possibly even a boyfriend.

"[Shiva's] got a lot of cat friends in America, but, at the moment, she's still looking for a kitty friend in the U.K.," Worrall said. "She tried to get herself a transatlantic kitty boyfriend, but he was already taken ... she couldn't tempt him away," she said with a laugh.

There's nothing wrong with giving your pet a voice, says Mike Pena and Anton Shepherd, co-founders of Petzume, a social networking site for pets and pet owners. Both at one point or another have spoken for their pets online, they say.

"We see a lot of people who create profiles for their pets ... and talk through the character of their pet to describe the day's activities, [their] likes and dislikes," Pena said.

Pena says it can be funny to explain, from the pet's perspective, why he or she chewed up your favorite hat. He speaks from experience.

Mary Lou Randour, a psychologist with the Humane Society of the United States, has no problem with people creating online profiles for pets.

"It probably feels like by doing this, that you're honoring your pet," she says. "You can have other people meet your pet and get to know them like you would with other members of the family. You can share the pet's personality as you experience it."

"Sometimes with other social networks, people feel pressure. They want to try and have important updates and make sure their image is protected," Shepherd said. "But with a pet social network, you don't have to worry about that. You can just be yourself."

Worrall, however, is perfectly comfortable being herself as Shiva on a broader network like Facebook. In fact, she prefers it. Worrall enjoys interacting through Shiva's profile with friends and family -- and, she says, with "other crazy cat ladies just like me."