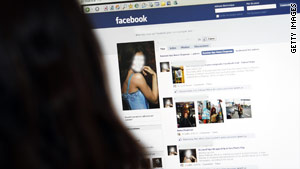 (Mashable) -- In a rather small survey conducted by a young psychologist, Facebook was shown to have some interesting correlations with self-esteem and narcissism in young adults.

In a survey of 100 college students, young people with narcissistic personality traits were shown to exhibit Facebook activity that was distinctly more self-promotional.

These people had "About Me" sections that referred to their intelligence and photos that were more about displaying the user's physical attractiveness than about capturing memories with friends.

Narcissism is defined in the survey, by a researcher at York University in Toronto, Canada, as "a pervasive pattern of grandiosity, need for admiration and an exaggerated sense of self-importance."

For the average narcissist, Facebook "offers a gateway for hundreds of shallow relationships and emotionally detached communication." More importantly for this study, social networking in general allows the user a great deal of control over how he or she is presented to and perceived by peers and other users.

The study postulated that narcissists would show more overall Facebook activity than average users and that their activity would be more self-promotional, either descriptively or superficially.

People who scored higher on the study's narcissism test also spent more time on Facebook and checked it more times each day than their less narcissistic counterparts.

Mashable.com: Weekend stories you may have missed

Male narcissists were more self-promotional in their "About Me" descriptions, using this section as an opportunity to highlight their intelligence and wit.

Female users with narcissistic tendencies tended to use images in their self-promotion, uploading content that "include[d] revealing, flashy and adorned photos of their physical appearance."

The researcher notes that this study is intended to be a preliminary look at nonynous social networking, a fairly new field for academic scrutiny.

As we abandon the fake avatars and cryptic usernames of years past and begin associating our online identities with our real-world lives, our online activities begin to have more relevance to our true personality traits.