Three of the web's most awkward phrases 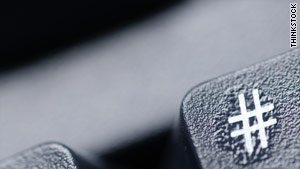 The hashtag has seen some overuse since it was introduced into the Twitter lexicon in 2007.
STORY HIGHLIGHTS
RELATED TOPICS

(CNN) -- Back in the day, Shakespeare enriched the English language by pumping out neologisms like a maniac. Fast forward 400-plus years, and we don't really have an official bard, per se -- at least not in corporeal form.

Nope, if you want to put your finger on the entity that's currently shaping and torquing our lexicon like a game of drunken Twister, you're already there: Look down at your keyboard, and then at the screen and down at your keyboard again. Yup. Our bard would be the internet, breeding ground of such gems as "BRB," "tweet," and, sadly, "OMG!!!!!"

Some may call the advent of internet-speak the demise of the English language, and to them we would say, "STFU."

Last year, "unfriend" was deemed the word of the year by the Oxford American Dictionary. So, much like that tattoo of your initials you got emblazoned across your butt last summer after too many G&Ts, this new slang is here to stay.

Besides, Shakespeare coined the word "puke," so it wasn't all sunshine and roses back in the 1500s, anyway.

Still, there are some internet terms that don't quite translate when applied to real-life situations (or, OK, any situation other than the original and intended one), because they're too obtuse, redundant or just plain stupid.

Here's our take on three of the most awkward phrases and symbols to go from screen to scene:

Ah, the hashtag. First introduced into the Twitter lexicon by Chris Messina in 2007, the hashtag was originally a way to tie together common threads of conversation (e.g., Follow Friday, tweets relating to events, news about natural disasters).

Now, however, the hashtag has also become a way in which to emphasize certain ideas on the microblogging site ("This weekend has completely murdered my soul #whiskeyandheartache), and, more recently, to denote sarcasm and caustic wit ("Wow, I really enjoyed that show. Etch-a-Sketch art is totally dope. More free wine, however, would have made the experience much more tolerable. #JustSayin').

That's all well and good in the Twitterverse, but when taken into the real world, the hashtag is a bit harder to hash out.

You see, the majority of society -- you know, the people who don't sit in front of their computers tweeting about how "Eating pancakes makes me feel like death now that I'm 30 #notakidanymore" -- doesn't understand what the hell you're saying when you tack what amounts to a pound sign onto any given sentence/word in your correspondence (e-mails, etc.). In fact, they could get offended by what you think is an artfully punctuated joke.

Listen, we do not yet have a symbol that translates into sarcasm (despite lofty efforts by the folks over at Sarcmark), and the hashtag is no exception. So, for now, stick to being caustic and dry, and even then, watch your mouth. Not everyone is socially fluent enough to recognize superior wit when they see it. #JustSayin'...

MoMA's Department of Architecture and Design may have added the "@" sign to its collection in March, but the artfully looping symbol has yet to find any real foothold in the conversational realm.

Look, it makes sense to add an @ to your name on Twitter, and Facebook now has a handy tagging feature that works with the addition of that particular keystroke, but referring to your friends as "@Tom" or "@T-Bone" in digital parlance such as e-mail or chat is just ... well ... redundant. You already said their name, so why do you need a directive?

Not only does it reek of self-promotion, it's just weird. And take it from us, tech and social-media experts' behavioral standards should not exactly be your yardstick of appropriateness.

Hey, did you know that before "LOL" came to mean "laughing out loud," it was code for "little old lady" in the medical world? Well, unless you're a doc alerting your compatriots to the arrival of a particularly ornery blue-haired broad, never should you stir your vocal cords to utter the phrase "LOL."

Why? Because you're not actually laughing.

The day that LOL becomes common parlance, my friends, will be the day that this whole internet Bard-penned comedy will become a complete and utter tragedy.