Pay for celebs to tweet for you (and charity) 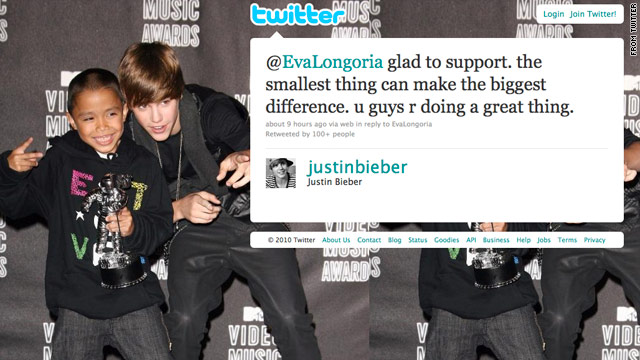 (CNN) -- Want to be re-tweeted by Justin Bieber?

TwitChange, a Twitter-based fundraiser that started Wednesday and runs through September 25, is giving users of the micro-blogging site a chance to get personal with more than 150 celebrities while helping troubled children in Haiti.

The campaign, backed heavily by actress Eva Longoria, was the brainchild of Shaun King, an Atlanta minister and activist. His charity, A Home in Haiti, got a huge boost when Longoria picked up the phone and called this year.

He pitched the idea of the first Twitter charity auction to her. The "Desperate Housewives" star, who's active on Twitter with more than 700,000 followers, helped hatch the plan, he said.

"At first, I was kind of skeptical," King said Thursday. "I believed she wanted to be involved, but I didn't know how it would make this kind of difference.

He said that an exact total was hard to nail down because it's always changing.

Most celebrities offer four kinds of auctions on the site. People can donate to be followed on Twitter by the celeb, to get one of their messages "re-tweeted" by them, get mentioned in a post by the star or all three.

Many celebrities are offering bonuses like phone calls, autographs, merchandise and other gifts for their top bidders.

Ultimate Fighting Championship President Dana White, for example, will give his top bidder front-row seats next to him for to the company's next martial-arts event, as well as plane tickets and hotel fare. As of Thursday morning, he had a $4,550 pledge for the package.

Singer LeAnn Rimes will be giving away an autographed microphone, and motivational speaker Tony Robbins is giving a trip for two to Fiji.

Many of the special offers are just being promoted by the celebs on their Twitter feeds, King said, because eBay doesn't allow auctions to be changed once they've begun.

"Most of them are a Skype call, a phone call, things that are kind of low-effort, no-cost for them but pretty cool for a fan," said King, who said a page listing the special offers will be added to the TwitChange site this week.

The fundraiser is, of course, getting plenty of free publicity as the celebs chat it up to their thousands (sometimes millions) of followers.

"Jessica Alba knocked me out of the top 10?! Ok if u win the bid for me on twitchange, I'll send u a topless photo... Of my dog," actress Jewel Staite, beloved by sci-fi fans for her role on the short-lived "Firefly" series, wrote on her Twitter feed late Wednesday.

Longoria, of course, was writing about the campaign nearly constantly.

"You all are amazing! Thank you for dealing w/ so many tweets today," she wrote to her followers. "We believe in this cause and it works because YOU spread the word."

Considering Bieber's 5.2 million Twitter followers and the presence of other seven-figure-follow Twitter stars like Demi Moore and Shaquille O'Neal, the top bid as of Thursday morning might be considered a bit of a surprise.

Zachary Levi, who stars as geek-secret agent "Chuck" on the NBC series of the same name, had gotten a bid of $6,600 for his offering.

Unlike other stars, Levi, who has about 80,000 followers, was cagey about what his gift to his top bidder would be -- but promised it would be good.

"[T]he kind, amazing, generous soul who bids the most, and subsequently helps me beat out the competition... will be rewarded epically," he wrote. "Coffee date with yours truly? Cameo on the show? Marriage proposal? The world may never know."

Like everything else on the internet, the fundraiser was drawing some snarky remarks on Thursday. Some Twitter users were mocking the concept of paying for a mention or follow from celebrities.

King said that's not the idea at all.

"We've interacted with a lot of the bidders," he said. "We know for sure that a huge percentage of the bidders may love this particular celebrity, but they're only giving the money because it's for charity."

Money from the auction will go initially to the Miriam Center, a home in earthquake-ravaged Haiti for children with autism, cerebral palsy and other special needs.