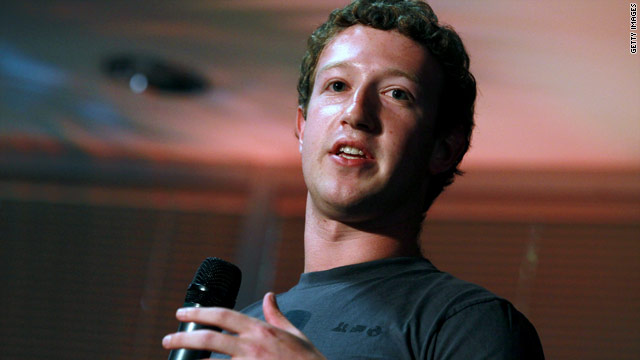 "Every child deserves a good education, and right now it's not happening" Zuckerberg said.

His donation will be the first grant handed out by his new foundation, Startup: Education, an entity financed by him and focused on bettering education in the United States.

Booker told Winfrey that Zuckerberg wanted the donation to be anonymous at first, but was persuaded to make the announcement public, hoping it would inspire others to donate as well.

With an estimated net worth of $6.9 billion, Zuckerberg ranked 35th on this year's Forbes 400 list of richest Americans -- up from 158th last year.

The announcement comes a week ahead of the release of "The Social Network" -- a highly anticipated movie about the early years of the social networking powerhouse.

The movie and the book it is based on -- "The Accidental Billionaires" by Ben Mezrich -- do not depict Zuckerberg in the most favorable of lights.

Responding to critics who have suggested that the donation is being timed to counteract the effects of the movie, Zuckerberg said: "It's a movie. It's fun. A lot of it is fiction ... This is my life. I know that it's not that dramatic."

Skeptics might question the timing of the move, but it would be foolish to underestimate the significance of the gesture
--Pete Cashmore, Mashable CEO
RELATED TOPICS

But some in the tech community say that, regardless of the timing, Zuckerberg's gift could have far-reaching ramifications on charitable giving.

"Skeptics might question the timing of the move, but it would be foolish to underestimate the significance of the gesture -- not only in its direct impact on public schools, but in its lasting imprint upon the technology industry," wrote Pete Cashmore, CEO of social media blog Mashable in a column for CNN.

"Zuckerberg's donation should be praised, as it will likely provide inspiration to the growing ranks of newly minted technology founders," he said.

According to Booker, 50 percent of high school students in Newark do not graduate. Booker and Christie hope that their new plan will provide a model for education reform nationwide.

Control of Newark public schools has been in the hands of the state since 1995. Under an agreement between Mayor Booker and Governor Christie, the state will maintain legal control over the district, but will authorize the mayor to develop a comprehensive education plan.

Zuckerberg grew up in Westchester County, New York, and founded Facebook in 2004, while studying computer science at Harvard University.