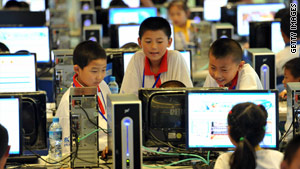 (CNN) -- Most parents think their children share too much information online -- and that search engines and social networks aren't doing enough to protect privacy, according to poll results released Friday.

More than 90 percent of the parents surveyed by Zogby International said they are "concerned" that their children share too much information online, and 75 percent said they would rate the job social networks are doing to protect online privacy as "negative."

The results, released by the nonprofit advocacy organization Common Sense Media -- which commissioned the poll -- do not mention particular social networks or websites by name.

"Parents want far more education and leadership about online privacy, and they clearly want the industry and the federal government to update privacy policies," Steyer said in a statement.

"We need a 'Do Not Track Kids' approach' similar to the 'Do Not Call' policies that restrict telemarketers," Steyer said.

"The poll results present a clear divide between the industry's view of privacy and the opinion of parents and kids," Steyer said.

To conduct the online poll of parents, Zogby International used a sampling of 2,100 adults from its online panel, which the polling firm says is representative of the adult population of the United States. The sampling margin of error is 2.2 percentage points.

The sampling margin of error for the online poll of teenagers was 5 percentage points.