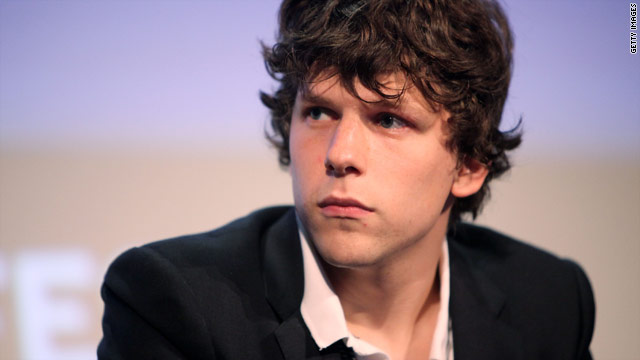 (CNN) -- That movie about Facebook -- more formally known as "The Social Network" -- appears to be changing people's attitudes about the real website.

According to survey data released by YouGov BrandIndex, younger people have tended to like Facebook more since the movie hit theaters October 1. Older generations' opinions of the online social network, meanwhile, have generally soured since the film's release.

The survey conducted by that group, which polls consumers for their general attitudes about companies, shows the generational divide over Facebook had been closing until October 5, shortly after "The Social Network" was released. At that point, adults 35 and older, who generally had been warming to the website, reported a less positive association with Facebook's brand.

People ages 18 to 34 continued to like Facebook even more, according to data sent to CNN by YouGov BrandIndex, which based its numbers on interviews with 3,000 people.

Wired's Ryan Singel writes that the positive impressions from 18-to-34-year-olds is somewhat surprising given how Facebook is depicted in "The Social Network." 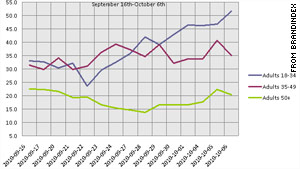 "That's despite the fact that the movie features no redeeming characters -- depicting Facebook's founding as a combination of backstabbing idea-borrowing, a way to get revenge on an ex-girlfriend and an attempt to vault Mark Zuckerberg into the upper echelon of Harvard society," he writes on Wired.com. "Meanwhile Sean Parker, the founder of Napster and one-time Facebook president, is portrayed as a paranoid playboy with a taste for coke and underage girls."

Video: Getting social with 'Social'

Some reviewers have written they came away from "The Social Network" without those negative impressions -- or without caring about them.

"I'm sure Zuckerberg doesn't like the way he is portrayed in the movie -- as a friendless, overly ambitious geek -- because it isn't accurate. But so what? Zuckerberg long ago lost control over what the world thought of him," writes Fred Vogelstein in a Wired article titled "Why Mark Zuckerberg Should Like The Social Network."

"If you start the most important company of the new millennium and are worth $7 billion at 26, no one is going to believe how down-to-earth you are, even if it's true."

Paste Magazine wrote Zuckerberg is a "dysfunctional genius" in the film.

Other well-known tech writers, including Peter Kafka at The Wall Street Journal, have said that the movie paints an unfairly harsh picture of Zuckerberg, the 26-year-old who started Facebook.

"It's hard to feel sorry for a billionaire. But here I am, feeling bad for Mark Zuckerberg. If you see the 'The Social Network' you're probably going to feel bad for him, too," Kafka wrote on September 13.

YouGov BrandIndex uses an in-house scale to judge peoples' impressions of the brands it surveys about, including Facebook, according to Wired. The scale, which ranges from minus 100 to 100, is a "net rating," according to the company.

On October 6, after the Facebook movie debuted, people from Generations X and Y rated the Facebook brand as a 52 on that scale, on average, up from 33 on September 16, before the film's debut. Adults older than 50 rated the website's brand as a 20 and those aged 35 to 49 gave it a 35, according to the survey.

The blog Mashable writes that its unclear exactly what impact "The Social Network" had on peoples' views of Facebook, but it's clear there is some degree of correlation.

"We can't draw any clear-cut conclusions and say that brand impressions were directly affected by the film, but it seems fair to say that the media buzz and discussion surrounding the film has certainly made Facebook a more prominent discussion point, at least from a branding perspective," Christina Warren writes on that site.