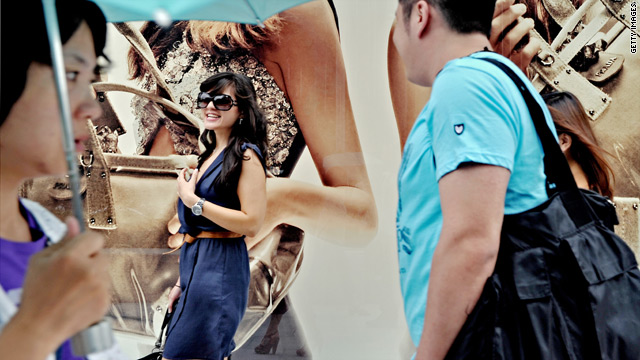 Bricks-and-mortar matter for luxury brands in China, but social networks and e-commerce are growing.
STORY HIGHLIGHTS

(CNN) -- How do western companies market to brand-conscious Chinese consumers?

Flagship stores can be one way, but the answer increasingly lies online with the country's estimated 400 million internet-users.

Yet rather than just building their own bespoke websites and expecting Chinese consumers to come a-clicking with their credit cards, big western brands are finding they need to adapt to the country's particular internet habits.

Foreign retailers, especially apparel companies, are now launching their own stores on Taobao Mall, a business-to-consumer site started in 2008 by the Alibaba Group, which also operates Taobao.com, a consumer-to-consumer e-commerce platform.

Recently, Adidas AG, the world's second largest sportswear brand, launched a flagship store on the platform. It will be the company's only online retail channel in China.

Taobao is a superb means of marketing research for companies that can build a database of consumers around China.
--David Wolf, corporate advisor

"I think it is something that is long overdue," David Wolf, president of Wolf Group Asia, a Beijing-based corporate advisory firm, said.

"What Taobao is offering [foreign retailers] is not just a new channel. It is offering a way to reach a whole new spectrum of consumers in China who want their products."

Taobao's nearly 200 million registered users generated $29 billion in transaction volume in 2009, according to the company.

"We felt that working with Taobao Mall offered the best approach to reaching out to more consumers because it is so clearly the most influential online business-to-consumer sales channel," said Christophe Bezu, chief e-commerce officer for Adidas, in an email.

"It allows us to reach millions of consumers in a very direct way, many of whom we would have difficulty reaching through brick-and-mortar storefronts.

"The decision was also an acknowledgement that Chinese consumers are increasingly turning to the Internet to do their shopping, so we are definitely trying to take advantage of this trend."

Internet sales in China are still limited, making up around two percent of total retail sales in the country, according to a 2010 Chinese consumer study from McKinsey. However the Beijing-based market research firm iResearch estimates China's online retail market expanded by 117 percent last year, from $19 billion to $39 billion, making it the world's second largest behind the U.S.

"Online shopping will indeed grow quickly," said Yuval Atsmon, an associate principal in McKinsey's Shanghai office. "But for most brands who traditionally have built successful brands through bricks-and-mortar distribution, it is clear that expanding their footprint into more second- and third-tier cities will provide much bigger opportunities. However e-commerce can be a smart interim step."

The best example of this is with luxury goods companies, like Louis Vuitton, Hermes and Gucci. They and a number of other luxury companies have opened up new stores with breakneck speed in places like Chengdu, a city in southwestern China, and Hangzhou, a city near Shanghai.

For brands that do not fall into the luxury category, like Adidas, expansion elsewhere in China can sometimes be difficult. Yet some see Taobao as an easy way for new or lesser-known entrants to make a name for themselves in the market, gauge where consumer demand is for products and then go there and open an actual store.

For most brands who traditionally have grown successful through bricks-and-mortar distribution, e-commerce is a good interim step.
--Yuval Atsmon, McKinsey Shanghai
RELATED TOPICS

Other companies are reaching out to consumers by forming their own online communities or taking part in discussions on bulletin board systems (BBS), a popular Chinese social networking platform.

Lancôme, for example, launched an e-community site called Rose Beauty. In three years, it has become the largest forum sponsored by a brand in China, with more than 100,000 members and one million posts per month, the McKinsey study said.

Computer company Dell has partnered with Renren, a popular social networking site, to create a platform for consumers to discuss why they like the company's products.

More than 81 percent of those who visit BBS and blogs make purchasing decisions based upon the recommendations and opinions of Chinese Internet users, according to CIC Data, a Shanghai-based research and consulting firm.

Yet BBS and Taobao may not be for everyone, or at least, for luxury brands. Chinese consumers, who make up the second largest luxury market behind the U.S., still value an in-store experience when buying an expensive bag, dress or coat, according to a 2009 KPMG consumer survey.

"Sixty four percent of respondents rated the retail experience as a significant factor in their willingness to pay a premium for luxury goods," the survey said. "Plush prestigious stores with attentive, knowledgeable sales assistants give shoppers a genuine sense that they are participating in something special."

And for those that are opening on Taobao, there is always the issue of other stores on the platform already selling their products. A quick search for Adidas on the e-commerce site resulted in 42,188 shops selling Adidas sneakers and 4,564 shops focusing only on Adidas goods.

"There is a lot of stuff online, maybe fakes and who knows what," Atsmon said. "Being in control and having an official store online can make a difference. They actually can tap into a huge volume opportunity if they do things well online. A few years ago, that may not have existed."