Buying Facebook goods, just a few cents at a time 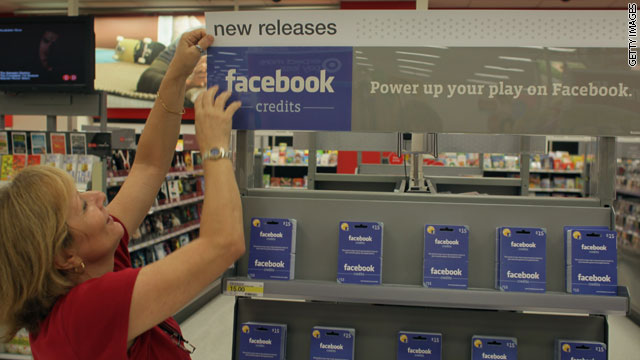 Facebook Credits can be purchased at stores like Target. But now customers can buy them in small increments with PayPal.
STORY HIGHLIGHTS
RELATED TOPICS

After a flurry of partnerships announced at the PayPal Innovate conference, the Web's linchpin payment platform said it will provide a new option for buying inexpensive virtual goods from the largest social network.

Facebook currently allows its users to buy Credits, the site's proprietary currency, with a PayPal account. Facebook will add the ability to buy virtual items individually, rather than in increments of $15, thanks to PayPal's new digital goods platform, which was unveiled at the conference.

Credits are used to purchase virtual gifts for friends or power-ups in games.

Developers making Facebook applications powered by Credits -- such as the Zynga Game Network, which makes FarmVille -- will soon have the option of receiving payments through deposits to their PayPal accounts.

"The gaming industry is often an indicator of what's to come," Facebook Chief Operating Officer Sheryl Sandberg said during the announcement. "More people play games on Facebook than on the top three consoles combined."

These features will roll out in the next several months, said Osama Bedier, PayPal's vice president of product development.

"PayPal is already one of the main ways to buy Facebook Credits," Sandberg said. "PayPal took the pain out of transactions."

Facebook also accepts credit cards and payments via cell phone from some wireless carriers. Gift cards containing Facebook Credits can be found at stores such as Target, Walmart and Best Buy.

Although PayPal had a partnership in place with Facebook in February, PayPal President Scott Thompson said these new features are a step toward expansions between the two companies. "Today's announcement was a refinement of our product," he said.

For Facebook, the Credits product may also need refinement. Sandberg took a moment during her announcement to poll the sizable audience about whether they had purchased Credits. Few people raised their hands.

"Try it!" Sandberg urged the audience. "You'll like it."

Facebook has drawn a million developers to make software and widgets that run within or connect with the social network, Sandberg said.

"The games and stuff that have happened on this platform are just amazing," Facebook chief Mark Zuckerberg said last week during a panel at his company's headquarters in Palo Alto, California. "Five years out, I think the world is going to look a lot more like Zynga."

But Facebook's platform isn't quite mature. That could have something to do with a flimsy relationship with developers, PayPal's Naveed Anwar said.

"Facebook has done a really good job building out their platform, but one area where they haven't really done a good job is paying developers," said Anwar, who is senior director of PayPal's developer network. "And that's where this partnership comes in."

PayPal announced a number of other agreements, including new ways to use the service to buy things within smartphone apps; using that phone in lieu of a credit card at a few stores in San Francisco; and buying memorabilia using software made for televisions. Next year, PayPal will launch an app marketplace to showcase websites and products that tie into its services.