Your vacation need not annoy your online pals 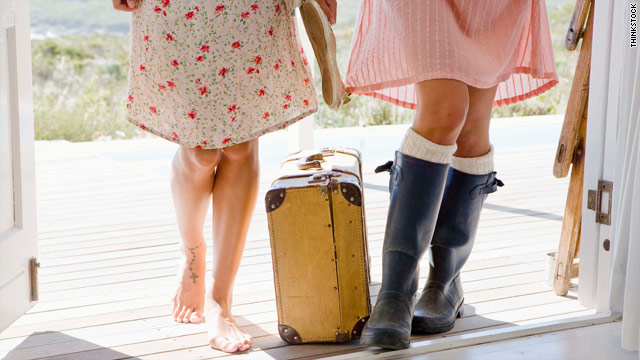 After vacation, take your time selecting the most interesting and relevant shots to upload to Facebook.
STORY HIGHLIGHTS
RELATED TOPICS

(CNN) -- After months and months of your cubicle walls contracting in on you like some kind of demonic fun house, it's finally time for that most coveted of reprieves: a vacation!

While many of you may breeze out your office door, throwing around claims like "I'm leaving my laptop at home!" "No cellphone on this trip!" and "I might just stay and become Amish!" it's highly unlikely that you're going to completely divorce yourself from the technological realm the minute you pull on your fanny pack.

Why? Well, with the rise of the smartphone and the growing ubiquity of in-flight Wi-Fi, we're about as addicted to tech as your average hipster is to heartache and broken dreams (read: very). Case in point: According to research from Xobni and Harris Interactive,72 percent of people in the U.S. check e-mail during their time off.

Although we're not advocating logging in to Gmail or Entourage while sunning on Hermosa Beach (that's just indicative of a bleak, coffee-stained future), we're all for staying at least a little plugged-in whilst unplugging.

Just remember, there's a fine line between sharing your vacation with your associates at home and becoming that annoyingly tan, infuriatingly-drunk-at-3-p.m. layabout who texts pictures of sun-drenched beaches to her cubicle-shackled friends.

Read on for three ways to keep your clock-punching compatriots abreast of your holiday goings-on -- without making them want to leap down the elevator shaft.

Remember the good old days when, after a vacation, Dad would get out the projector and invite the neighbors over for a Jell-O mold, cocktails and an endless parade of awkward photos of you and your sister blinking into the sun in front of the Grand Canyon?

Well, we've moved past the days of such outmoded projectors (unless it's a bad-ass D-ILA and you're screening "Planet Earth" while trying to seduce that cinephile chick you picked up at the indie film fest last week), and we really should move past the practice of photographic torture.

Instead of uploading every. single. snap. to Facebook as soon as you get home, take your time selecting the most interesting and relevant shots. We're assuming that since you're putting your photos online, you want people to look at them, and no one wants to look at 15 identical pictures -- sans captions -- of your aunt standing in front of the Chinese Theatre with her arm around the dude dressed as Jack Sparrow.

Also, now that Facebook has launched drag-and-drop functionality, making it easy to reorder you albums, you have no excuse for shirking chronology. Put your photos in order so that your friends can witness the progression of your vacation-induced joy and abandon -- from slightly bedraggled relief to hugging-the-redwoods-in-Muir-Woods ecstasy.

For those among you who have just returned from a group vacation replete with inside jokes ("She started singing in her sleep!" "Hot drinks, really gets you going!" "The body fit in the trunk perfectly!") and shared experiences, there's a ton of places you can view and trade snaps with your traveling companions without boring/perplexing your excluded pals.

Facebook recently revamped its Groups feature, making it a more private, personal place to trade stories and pictures. There's also a new social network called the Fridge where you can create private groups that can only be seen by invitees. Such venues are probably a better place to share those naked photobooth shots than, say, Flickr.

Create a guidebook via location-sharing

You know that chick? The one who's always updating her status about her wondrous vacation experiences? Yeah. We hate her. Especially when things are slow at the office and we click over to Twitter, where she's describing in vivid detail the delicious goat cheese, avocado and walnut crepe she just ingested in Mendocino.

Although some of you may be hesitant about location-sharing, if you're smart about it (i.e. only letting friends follow you on Foursquare, having a closed Twitter account and Facebook profile, etc.), Foursquare and the like can be great for sharing your experiences with your friends.

Instead of just broadcasting how much fun you're having at that bike-punk bar in the Mission, check in via Foursquare and tell your friends about the awesome jukebox chock-fulla obscure polka tracks. That way, they can learn a little about your getaway locale of choice and perhaps get some tips for future trips.

And, bonus for you: You'll have a detailed record of everywhere you visited -- which comes in handy when, months later, you're trying to remember where you met that dude who keeps texting you about seeing his metal band play when he's in town next week.

This may seem obvious, but, um, you should probably tell people when you go out of town for a week or so. Yeah, you've probably already set up your vacation responder at work (Make sure you spell everything right in that sucker; you don't need clients thinking you're an idiot when you're not even around to mess up in person), but your friends and relations probably wanna know your whereabouts at as well. You know, so they don't think you hate them.

We suggest putting up a non-annoying Facebook status announcing that you're taking off, as well as shooting off a quick mass e-mail. You can also use this opportunity to crowdsource your pals and ask them what to hit up while you're off the clock.

Yeah, this level of digital checking-in might seem a little excessive, but we live in a world in which you can will your digital assets to loved ones via services like Entrustet so a quick, "Hey, I'm out of town" tweet really ain't that extreme.

Come to think of it, you should probably check out Entrustet before that bull-running/wine-tasting trip to Pamplona. Just sayin' ...