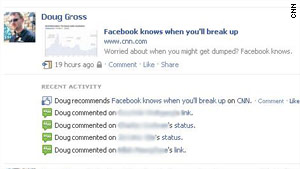 Facebook's font size on status updates and the like appears to have shrunk overnight.
STORY HIGHLIGHTS
RELATED TOPICS

(CNN) -- Facebook is the biggest name in social networking. But overnight, it got smaller.

The font size on much of the site appears to have shrunk -- a tweak that has folks complaining about their poor, News Feed-browsing eyes.

By Wednesday morning, users had taken to Twitter to sound off on the change, mostly for the negative.

Other comments took a sillier tone.

"What kind of bionic carrot-flavored crack rock are the facebook developers smoking to make the font this small? I call ageism!" said a user with the screen name "thembithembi."

The responses were predominantly negative, but not unanimously.

A couple of Facebook groups have sprung up to complain about the change, but none had picked up many members as of early Wednesday.