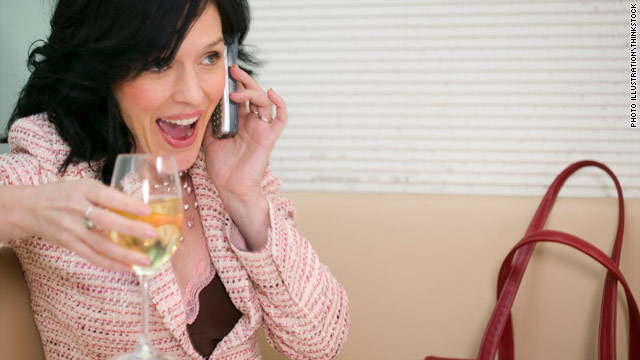 "Now you have myriad channels by which to potentially embarrass yourself while under the influence," our Netiquette columnists say.
STORY HIGHLIGHTS
RELATED TOPICS

(CNN) -- Remember when the only way you could electronically ruin your life after imbibing a few G 'n' Ts was by picking up the phone? "I stilll lurrvvvee you... even if you are a lying jerk who still kisses like a reptile at age 34. Please take me back! I'm outside your building... It's raining and my shoes are all squishy."

Well, those days are over. Now you have myriad channels by which to potentially embarrass yourself while under the influence. And if you're among the 28 percent of the population with smartphones, this is true even if you're out and about and not pathetically staring at your screen at 3 a.m., alone save for your good friends Bud(weiser) and Johnny (Walker).

While we can't help you cease replacing the emptiness in your soul with shiftless parties in communal living/performance spaces replete with the nectar of glowsticks and Four Loko, we can help you undo -- or prevent -- some of the damage you will inevitably inflict whilst doing so.

Read on for four ways you can turn back the clock on your Internet indiscretions.

You don't have to be a rampant partier to benefit from these tools and tips. Even the most stoic among us have moments of insanity in which we fire off missives into the internet ether we wish we could reverse.

Let's start with the most old-school of communication devices -- the phone -- and a simple exercise: 1). Take out your phone, 2). Close your eyes, 3). Scroll through your contacts 4). Open your eyes, 5). Dial. If you're now thinking to yourself, "Oh, no! Don't call THAT PERSON!" it's time to clean out your phone.

Let's face it, when it comes to our address books, we're all woeful hoarders -- you know, those people who live in castles fashioned from piles of newspapers, around which prance a parade of feral cats? That's us. From Thai delivery services located in cities we no longer inhabit to exes we no longer remember ("Who the hell is 'Ricardo Lardo'? I feel like it might be a pejorative nickname designed to dissuade me from contacting him...") to old bosses, for some reason, we cling to these old digits like ratty blankies, clutched in our no-longer-childlike hands.

Here's a hot tip for all you hoarders out there: Take out the trash. Delete any number that would make your plasma harden if dialed randomly. You'll thank us when you're fumbling with your cell at 2:33 a.m. desperately trying to call a car service, and your old boss Caren (who fired you two years ago after you cussed her out and threw her impressive collection of desk toys against the wall in a fit of rage) gets a surprise ring-a-ling.

You've just shared a bottle of wine -- or four -- with a couple of friends, over which you discussed everyone's various and sundry romantic woes. Stumbling a bit, you pour yourself (and about a gallon of pinot) into a cab, where the cabbie -- who is an aspiring novelist, in the style of the ever-venerable Bukowski -- tells you that you'll never fall in love in this city.

It's a dark time, and the hearts of young folks are even darker. Feeling a bit more black and blue than usual, you go to your computer, thoughts of your not-quite-platonic best friend tumbling through your mind. You open an email from said friend, containing a link to a hilarious video featuring a bomb squad discovering a box of kittens (ha!), and shoot off a reply, "I love you. No. Seriously."

Suddenly, you sober up -- what with all the expletives that are spewing from your mouth and the sweating -- and stare at the computer in horror. Well, luckily for you, Google -- in typical Big Brother fashion -- knew that you would do that, and has a quick fix: The Undo Button.

In the past, the lesser-known Gmail feature only gave you 5 seconds to un-email, but a few months ago, the service extended that limit to 30 seconds. To unlock this ability, merely click the little green icon on the top right of your inbox, which will take you to Google Labs.

Find "Enable Undo Send," do so, and choose the 30-second option. Now your BFF will never know (unless, of course, you're slow on the draw -- or you pass out before reversing the damage). Remember: After enabling it, you still have to go up to "settings" to change the duration.

Still don't trust yourself? Scroll down to the "Mail Goggles" app in Google Lab -- during windows of time you assign (say, 1 to 6 a.m.), it asks you to complete a few simple math problems before you proceed with the emailing. It's like a more helpful version of, "How many fingers am I holding up?"

It's 4 a.m. and you are a pathetic loser. You're tweeting incessantly about how your parents think you're a disappointment, how you think you're in love with your intern and how that weird rash on your-- Oh, and did we mention there's a half-empty bottle of vodka and a fully empty container of Mexican takeout in bed with you? Yeah. Times are tough.

Luckily for you, you can actually prevent such sad-sack behavior with a simple download. Just last week, web security company Webroot came out with a social media sobriety test. It's basically a Firefox plugin that, once installed, will require you to pass a test (like typing the alphabet backwards) in order to access services like Twitter, Facebook and MySpace between certain (inebriated) hours.

Now if only you could install said plugin on your fridge. Did you really need to consume an entire block of cheese?

Ever decide to friend someone on Facebook because, well, it would be kind of funny? You know, your high school math teacher who always smelled vaguely of feet, that fake(?) Justin Bieber account, your mom?

Well, Facebook actually has a little-known feature that allows you to take those friend requests back -- you know, after the hilarity dies down and you realize that since you didn't want to be friends with that kid who chewed incessantly on his jacket collar in middle school in middle school, you certainly don't want to befriend the grown-up version now. Merely go to said weirdo's profile and click on the little "x" next to "Awaiting friend confirmation" to take it back.

Of course, Weird Wally will still get the requisite email alert that initially requested his friendship, so the damage is not fully mitigated. But, well, he's weird... he's probably used to rejection, right?