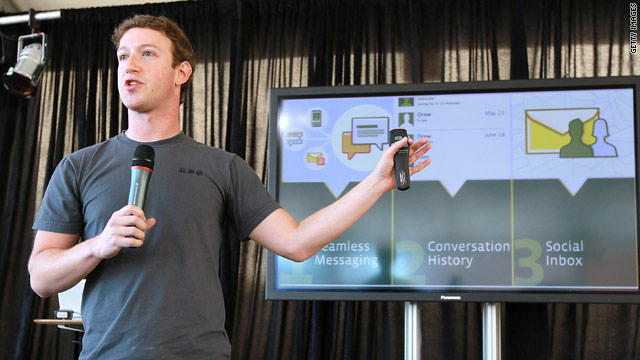 San Francisco, California (CNN) -- Facebook wants to be your inbox for every kind of message.

The world's largest social networking company is providing each of its 500 million users with an @facebook.com e-mail address as part of a revamped messaging system that integrates with various types of communications.

Facebook's new inbox can tie together mail sent to someone's e-mail address, instant-message aliases and cell phone number in addition to Facebook's own messages and chat conversations. Like the News Feed, unread notes are ranked by how important Facebook thinks the sender is in your life, and users can tweak those settings.

"Because we know who your friends are," said Facebook CEO Mark Zuckerberg, "we can do some really good filtering for you."

Rather than creating separate threads for each conversation, Facebook logs all communications and groups them together by contact. So all chats with your mom are listed on one page. Based on a brief demo Monday, the stripped-down page resembles an IM or text-message window, eliminating the option of e-mail subject lines.

"I should only need those two things: a person and a message," Andrew Bosworth, a software engineer at Facebook, said at the company's news event Monday. "The system is definitely not e-mail. We've actually modeled it more after chat."

Incoming messages pop up on the bottom of Facebook's site, similar to the chat feature.

"We think that we should take features away from messaging," Zuckerberg said. "We think it should be minimal."

But like e-mail, users can attach files. Sharing documents via Microsoft's Office Web Apps service will be integrated "over the coming months," a Microsoft spokeswoman said.

The inbox is broken into three folders.

The "social inbox" contains conversations with your top contacts -- people you message with most often. An "other" folder keeps correspondences of less importance, or those with people or companies that Facebook's system is not familiar with, such as banking notices. (Operators of pages you've "Liked" can send messages to this folder as well.) Finally, the service filters what it thinks is spam into a last bin.

Facebook will launch this with a "slow rollout," said Bosworth, turning it on for more users over time. Facebook's iPhone application will support the new inbox Monday for accounts that have it enabled, Bosworth said.

The system may incorporate more services later. Zuckerberg said he considered voice as one.

For instant messaging, it supports Jabber -- the underlying technology of Google Chat -- but not Skype, AIM or Windows Live Messenger. Support for IMAP, which would allow Facebook.com e-mail users to access their inbox from a program such as Microsoft's Outlook, is in development, Zuckerberg said.

Zuckerberg opened the announcement by talking about changes in how young people communicate. He reminisced about a conversation with some high school students who said they primarily talked through Facebook and text messaging on their phones. E-mail is "too slow," he recalled them saying.

"It's not that e-mail doesn't get delivered immediately," Zuckerberg said. "It's too formal."

Numerous studies, as recently as April of this year, have found that e-mail is a very small part of how young people keep in touch. Facebook has modeled its new system to reflect those trends. Zuckerberg said 350 million people use its system for private correspondences, transmitting 4 billion messages a day.

Zuckerberg will take the stage again Tuesday during the Web 2.0 Summit, presumably to elaborate on this new system, which Bosworth said has been among the company's biggest undertakings. The project took about 18 months of work from 15 engineers -- the largest team the company has ever devoted to a new product, Bosworth said.