Exploring the anti-social side of social media 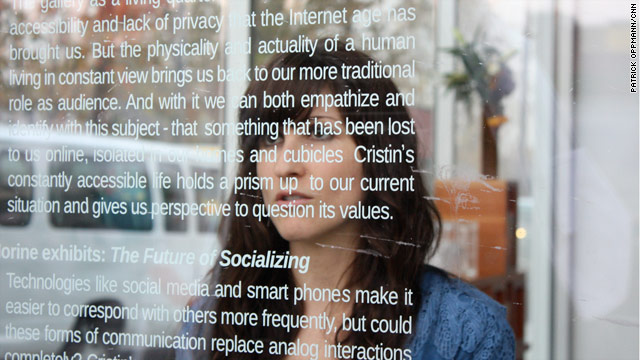 Portland, Oregon (CNN) -- People walking by the floor-to-ceiling glass windows surrounding Cristin Norine could be excused for thinking that she is working in an office alone or lives in a ground-level apartment in dire need of drapes.

But for 30 days that's exactly what Norine is. Her "cell" is a large storefront that sat unrented for months until the owner decided to let artists use it as a gallery so it wouldn't look so empty.

Norine has moved in donated furniture, exercise equipment and a large-screen computer with a projector overhead so everyone walking by can see as she tweets, updates her Facebook page and Skypes.

During her stay no one comes in and Norine never goes outside. Her only contact with other people is through technology.

In that regard, Norine says she is not that different from anyone else.

"We think we are being social on these gadgets," she said. "And it can be a really great thing when people live in different states, but when you are at dinner or you are trying to have a conversation and you are being distracted by these other things. Or maybe you are just not going out as much because you are staying home and are online."

Usually a TV and photography production manager based in Los Angeles, California, Norine ended up in her own personal fishbowl in Portland after a chance meeting with Josh Elliott.

Norine talks to CNN via Skype

Elliott worked in photography in Oregon and the two realized they shared a similar curiosity about the effects that the barrage of new technologies are having on people.

Elliott knew about the available storefront and almost overnight, Norine moved in.

The Public Isolation Project was born.

As she literally X's off the 30 days she is spending cut off from the world, Norine chronicles her experience through her blog http://www.publicisolationproject.com/.

On the other side of the glass, Elliott is filming a documentary on their collaboration.

They are not anti-technology, Elliott says, just hoping to inspire more conversation about how everything from the internet to iPads are shaping people's lives.

"We are accessible 24/7," Elliott says. "Having a cell phone in your pocket you can be called or texted or video chatted at any point. With Facebook you are updating all time. You have friends on Facebook that you have never met, and they know more about what's going on in your life than your mother does who is not on Facebook."

Norine puts herself out there in a way that would make the most avid Twitterer or Facebook addict suffer an attack of shyness.

She eats, exercises and sleeps in full view of a busy Portland street. With a bathroom as her only private area, she is on almost constant display.

Norine's exhibitionism is extreme but hardly unique. Last month, the Chicago Museum of Science and Industry held a prize for a contestant to move to the museum for a month and become a living exhibit. Some 1,500 people applied.

In 2004, a Malaysian woman set a record for enduring 32 days in a glass box with hundreds of scorpions as company. In 2000, an actress living in a glass house in Chile inspired protests after taking public showers.

Elliott says the near total lack of privacy takes a toll on Norine.

We think we are being social on these gadgets.
--Cristin Norine
RELATED TOPICS

"Even on a Sunday when she just wants to take a break from this and have a cup of coffee," he said, "There's people coming up and knocking on the window. She just doesn't have any time for herself and I think that's hard."

Norine admits she didn't think she would make it past two weeks and has what she calls "the bad days."

On day 16 of her blog she writes, "Went to bed before 9 p.m. I wasn't feeling well and was too tired to write. ... I could really use some fresh air."

But she says having a routine has made the experiment more bearable.

"I get up, I make myself coffee and breakfast and get ready." Norine says. "Some days I'll be working out. Then I get on the computer and do my work -- I try to take a lunch break. I even have people who will come and have lunch with me on the other side of the window."

Norine e-mails and Skypes and chats online with anyone who wants to know more about her and the project. Until, she says, the overload sets in.

"I'll realize I need to take a break," Norine says. "And I'll go and do something that doesn't have to do with the computer and I can't turn it off. I still hear those dings and I get drawn back to the computer. I definitely have noticed since I have been here that I am addicted!"

The project ends on December 1 and Norine says she yearns for human interaction, a good meal and to hear live music.

Even if Norine can't wait to leave her self-imposed prison, she and the project have changed the surrounding neighborhood.

People who walk by her every day on their way to work stop for a few brief seconds to wave hello.

Day laborers awaiting work across the street watch her moving around the living space as if it were a favorite soap opera.

New friends pop by and hold notes against the window.

A woman who only gives her name as Debra watches Norine intently for several minutes before saying, "I know what it's like: I have an infant and I get stuck in my house all the time and I find myself so hungry for adult conversation."