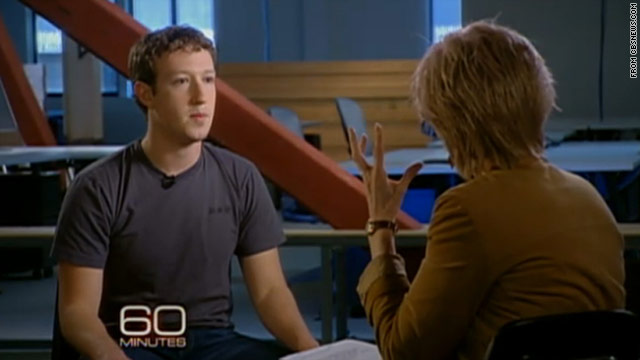 (CNN) -- So you missed Mark Zuckerberg's Sunday interview on "60 Minutes"?

I'm sure you were too busy coding your own social network. Never fear. You can watch the full 24-minute interview with Facebook's CEO on the CBS News show's website, and we've got a speedy recap of the best quotes here.

Zuckerberg didn't cover much new ground in this interview, but he gave his interesting impressions about "The Social Network," the recent movie about his life, the Harvard twins who sued him and his extensive T-shirt collection.

Oh, and then there was this gem of a question:

"Is the goal for you to conquer the whole internet? To own the internet?"

"Well, think about it like this, people -- if they can use the product -- of any category, photos, groups, music, TV, anything, either by themselves or with their friends, I think most of the time, people want to do those things with their friends."

Interviewer Lesley Stahl: "So, is the answer yes?" (laughs)

Zuckerberg: "I think -- so, I mean, the answer ... is that we want to help other people build a lot of these products."

Never a natural communicator, Zuckerberg looked more comfortable than he did in his previous "60 Minutes" interview in 2008. Sunday's segment also referenced Zuckerberg's awkward onstage chat at the D8 conference in June, during which he appeared anxious and sweaty when asked about concerns over Facebook users' privacy.

Here are some of the other highlights. Assuming Facebook doesn't "conquer the whole internet" before you get to read on, let us know what you think of the interview in the comments section.

On the film version of his life

Zuckerberg: "I can't tell you how many messages I've gotten from people who use Facebook writing in to say this movie was really inspiring to me. After seeing this movie, I want to start a company. Or I want to go into computer science, or I want to study math. And if the movie had that effect on people, then awesome, right? I mean, that's great."

On his love life in the movie

"There are hugely basic things that they got wrong, too. I mean, they -- they made it seem like my whole motivation for building Facebook was so I could get girls, right? And they completely left out the fact that my girlfriend, I've been dating since before I started Facebook, right?"

On selling your information

On mistakes (like the fact that some Facebook apps have, in fact, sold user information to advertisers)

"Now, do we get it right all the time? No! But it's something that we take really seriously, and every day we come to work and just try to do a good job on this."

"I mean, privacy and making sure that people have control over their information is, I think, one of the most fundamental things on the internet."

On the social revolution

"I think what we've found is that when you can use products with your friends and your family and the people you care about, they tend to be more engaging. I think that we're really going to see this huge shift where a lot of industry is ... and products are just going to be remade to be social."

"Photos originally weren't that big a part of the idea for Facebook, but we just found that people really like them, so we built out this functionality.

On working all the time

"I work at Facebook and I spend all of my time there, right? I mean, here are my friends. I grew up in New York and now I live in California, right. Those really kind of basic, important things."

On the 'Winklevii' (his movie character's nickname for Cameron and Tyler Winklevoss, the Harvard classmates who sued him over Facebook's origins)

"It wasn't a job, they weren't paying me, I wasn't hired by them or anything like that. And then, the idea that, you know, I would then go work on something completely different, like Facebook, and that they would be upset about this all these years later is kind of mindboggling for me."

On being freaking rich: