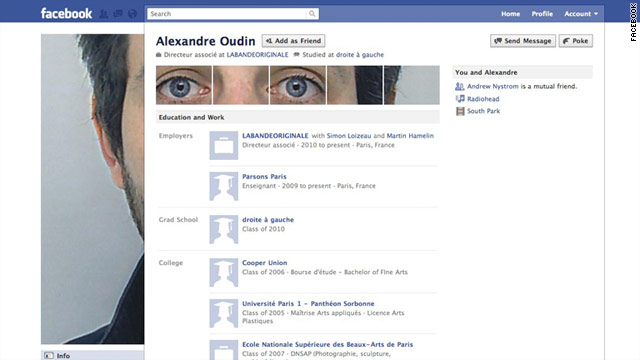 Alexandre Oudin of Paris is credited as a pioneer of this new type of Facebook profile art.
STORY HIGHLIGHTS
RELATED TOPICS

(CNN) -- Facebook unveiled a redesign of its profile pages earlier this month that rearranged users' personal info and photos into a streamlined layout.

But some enterprising designers have taken the revamp one step further, turning their Facebook profiles into creative works of art.

Where most users saw a rigid presentation of one profile photo next to five smaller, uniform thumbnails, some saw potential. The website Reface.me has organized a page with some of its favorite profile-page reimaginings, which it calls "profile hacks."

Alexandre Oudin, who works at a consulting firm in Paris, has been credited by many bloggers as the pioneer of this young art phenomenon.

Oudin's main profile picture is of the right side of his face. Each of the five thumbnails are to-scale pieces of his eyes, nose and hair. Together, they form a stunning composite of his face.

"I used Photoshop and played a little bit with Facebook's privacy settings," Oudin told CNN in a message on -- where else? -- Facebook. "Just wanted to have fun with the new profile."

Nelson Caparas, who lives in the Philippines, hacked together a similar project, showing his ear in the main picture and his eyes and a floral backdrop in the smaller shots.

"Right after seeing Mr. Alexandre Oudin's brilliant idea, I couldn't resist trying," Caparas wrote in a message. "It can be tricky too with the privacy settings and profile information so you really have to take a lot of time to perfect it."

For a more ridiculous take on the profile effect, Ouri Stopek's shows a picture of a little person named Super Kidi burning cars by firing lasers from his eyes. Stopek, who develops a French auction site, used to be a painter and said he leveraged some of his old techniques for the project.

Vlad Hernandez, a Web designer from Calgary, Canada, spotted the trend early on a technology blog and gave his own face composite a shot.

"I love learning new things," Hernandez wrote in a message. "In my business, the more I know, the better. It makes me stand out to my peers and prospective clients."

For many, this type of unconventional project is a creative outlet. "I definitely did this for the sake of art," Caparas wrote.