International space station gets a 'window to the world' 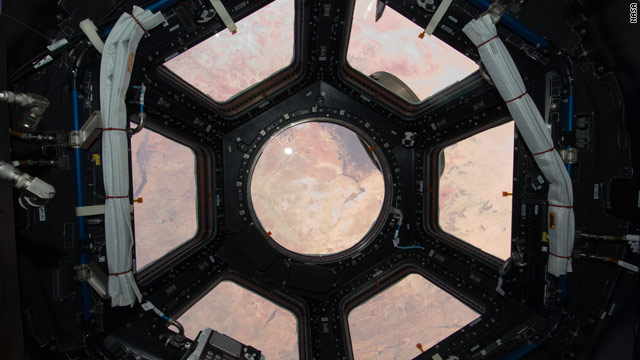 The Sahara Desert is visible through the seven new windows on the international space station.
STORY HIGHLIGHTS

(CNN) -- The international space station now has a room with a view -- and oh, what a view it is.

Astronauts from space shuttle Endeavour installed a connecting module, or node -- sort of an orbiting sun porch -- that will provide additional room for crew members and the space station's life-support systems.

The node's crowning feature is a cupola -- a robotic control station with six windows around its sides and another in the center. NASA expects the windows to provide a panoramic view of Earth, celestial objects and visiting spacecraft.

Endeavour Pilot Terry Virts opened the window shutters one at a time early Wednesday, giving spacewalkers Robert Behnken and Nicholas Patrick a peek into the room they had helped install.

Behnken and Patrick wrapped up their third and final planned spacewalk, a 5-hour, 48-minute effort, at 3:03 a.m. EST. They removed insulation blankets and launch restraint bolts from each of the cupola's seven windows.

Inside the cupola, Virts opened and then closed each window in turn, beginning with the circular 31.5-inch center window. He was the first to look out of that largest station window, on the station's Earth-facing port, NASA said.

Near the end of the spacewalk, all the windows were opened simultaneously.

Mission Specialist Kathryn Hire congratulated the spacewalkers for "raising the curtain on a bay window to the world."

President Obama called the astronaut crews of Endeavour and the space station late Wednesday afternoon from the White House to congratulate them on their ongoing mission. Obama also turned over his telephone to visiting middle school students, who asked questions of the astronauts.

The cupola will house controls for the station's robotic arms and will allow crew members to monitor spacewalks and other exterior activities. The window shutters that can be closed to provide protection from orbital debris.

The space station, which orbits the Earth at a height of some 250 miles, is due to be completed next year. It's now about 90 percent complete.