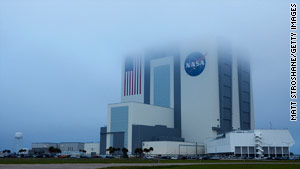 (CNN) -- After spending an extra day in orbit, the seven astronauts aboard the space shuttle Discovery prepared for a Tuesday morning landing at Kennedy Space Center in Florida as NASA officials closely monitored weather conditions in the area.

Officials were ready to redirect the landing to Edwards Air Force Base in California if Florida's weather proved unfavorable during the two Tuesday morning landing windows.

The shuttle was on schedule for a 7:34 a.m. ET touchdown at Kennedy if conditions allowed. A second opportunity at Kennedy if a delay is necessary would lead to an 8:08 a.m. landing.

The astronauts were awakened at 10:21 p.m. ET Monday to begin landing preparations, according to NASA, with mission control playing Willie Nelson's "On the Road Again" as their wake-up call.

The shuttle launched on April 5 and docked to the International Space Station two days later.