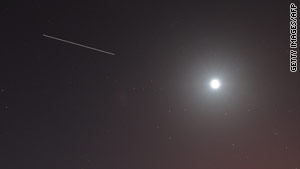 The search for life in space has been the focus of much attention in recent days.
STORY HIGHLIGHTS
RELATED TOPICS

(CNN) -- If you're looking for alien life in the solar system, it might be best to start small.

That was the message from NASA on Wednesday as researchers listed eight possible missions that would look for alien life by closely examining microorganisms and minerals.

"Astrobiology and the search for life is central to many of the most important missions that we are studying," Steve Squyres, a researcher with Cornell University, said on a conference call with reporters.

"It is one of the key drivers for solar system exploration."

The possible missions, which include using robots to get soil samples from Mars and looking for life in water on distant moons, have not been approved.

NASA has to decide which of the missions to fund.

By looking for patterns created by living organisms, NASA hopes to learn about the scope of life in the solar system and also to probe for clues about how life began on Earth.

The continuing search could include the following missions: sending landers to Mercury; analyzing methane on Mars; probing into the oceans of Europa, a moon of Jupiter; looking for organic material on Titan, one of Saturn's moons; and even looking for signs of life on comets.

The news comes as much public attention is focused on the search for alien life -- both in our solar system and beyond.

Hawking talks about his view in a Discovery Channel series, "Into the Universe With Stephen Hawking," which began airing this week.

On the show, Hawking suggests that extraterrestrial beings might not harbor goodwill toward people on earth. He imagines that aliens might have the technology to harness energy from whatever star they're near. The process, he proposes, could open a wormhole that could let them travel large distances.

Hawking's warning contrasts with the excitement some are showing about the search for extraterrestrial intelligence.

Just last week, the Search for Extraterrestrial Intelligence said it was releasing its data to astronomers and researchers all over the world, hoping more people would join the search.

NASA's search has extended outside the solar system as well.

Last year, NASA launched a Kepler spacecraft equipped with a special telescope to try and find Earth-size planets in this galaxy.

The spacecraft is on a three-and-a-half-year mission hunting planets, but NASA has been able to download data.

But even without the evidence from Kepler, some believe there are aliens floating somewhere out there.