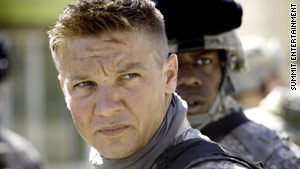 (CNET) -- Producers of Oscar-winning film "The Hurt Locker" have made good on a promise to file copyright lawsuits against people who illegally shared the movie via peer-to-peer networks.

Voltage Pictures, an independent production company, filed a copyright complaint on Monday against 5,000 John Does in federal court in Washington, D.C. According to court records, next on the company's to-do list is to learn the names of the John and Jane Does from their Internet service providers.

Attorneys for Voltage wrote in the complaint that unless the court stops the people who pirate "The Hurt Locker," then Voltage will suffer "great and irreparable injury that cannot fully be compensated or measured in money."

Voltage has asked the court to order anyone who downloaded the movie illegally to destroy all copies of "The Hurt Locker" on their computers and any other electronic device that they may have stored the film.

As for monetary damages, the movie's producers did not ask for a specific figure but want those found to have pilfered the movie to pay actual or statutory damages and cover the costs that went into filing the suits.

So, here we go again.

The "Hurt Locker" producers aren't the first to kick off this new round of suits against individuals. A company calling itself the U.S. Copyright Group seems to be spearheading these efforts and has filed lawsuits on behalf of 10 other movies, including "Far Cry" and "Call of the Wild 3D."

None of those flicks have come close to earning the notoriety of "Locker." The film won six Academy Awards this year, including one for "Best Picture." The movie was a disappointment at the box office, however, grossing only $16 million domestically.

Nonetheless, a film with an Oscar pedigree could potentially whip up a lot of sympathy among independent filmmakers for the idea of taking a stand against file sharing.

But the filing of a lawsuit does not a successful legal campaign make. Not when you're talking about the volume of file sharers Voltage has set its sights on.

This is well tread ground after all. The four top record companies attempted to use litigation as a deterrent for five years and were confronted by bad publicity, big legal costs, and this little nugget: the suits didn't slow illegal file sharing.

And the labels are large corporations with lots of cash to fund antipiracy operations. Voltage is relatively small and isn't backed by the Motion Picture Association of America, the trade group representing the six largest film studios, including Disney, Sony Pictures, and Paramount Pictures. The MPAA employs staff to help prevent studio-backed films from leaking to the Web and track them down when they occur.

It appears the Copyright Group, which is private and has nothing to do with the government despite the official-sounding name, is offering smaller film companies a means to fight back against piracy.

Whether Voltage can bankroll a legal campaign involving 5,000 people, or whether litigation can make up for lost profits remains to be seen.

But two things are for certain: First, Nicolas Chartier, who co-founded Voltage, doesn't appear afraid of some bad publicity. On the contrary, he seems to welcome it. Not only did he get banned from the Academy Awards for lobbying judges to vote for his film, but he recently called those who disagree with his lawsuits "morons."

The second thing that "Locker" sharers should know is that according to the filing, Voltage already has the Internet protocol addresses of the 5,000 John and Jane Does.

There was some question whether companies such as Time Warner and Comcast would provide the information because the Copyright Group has filed so many requests for IP addresses; about 50,000 for a dozen or so films. The ISPs say they don't have the resources to chase down this many. Remember, in five years, the RIAA filed suit against less than 40,000 people.

"The plaintiff has identified each defendant by the IP address assigned to that defendant," Voltage's attorneys wrote. "The plaintiff believes that information obtained in discovery will lead to the identification of each of the defendant's true name."