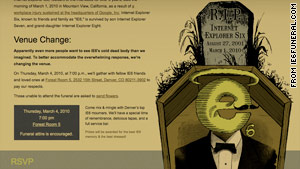 (Mashable) -- According to web analytics company StatCounter, Microsoft's Internet Explorer 6 is now truly a relic of the past with less than 5 percent market share in the U.S. and Europe.

For years, IE6 caused headaches for developers and prompted many users to switch to alternative browsers. It was full of security holes, and it broke nearly every web standard in the book.

Since it was the default browser on many Windows machines, it was also the dominant browser in the early aughts, reaching 90 percent market share in 2002 and 2003.

Unfortunately, it outstayed its welcome by a good five years, keeping a solid chunk of the market share even after Internet Explorer 7 and 8 were released.

Now, StatCounter's numbers, based on an analysis of 15 billion page views in May 2010, indicate that IE6 usage in the U.S. has fallen to 4.7 percent from 11.5 percent in the last 12 months, meaning that IE6 is finally becoming a footnote in the history of the Internet.