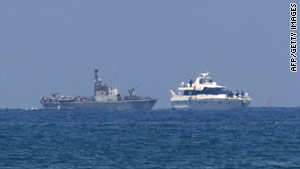 Israel is using social media tools to try to rehabilitate its image after a deadly raid.
STORY HIGHLIGHTS
RELATED TOPICS

(Wired) -- The Israeli government is hoping YouTube and Twitter can help restore its reputation after a botched raid on a Gaza-bound flotilla killed nine people. Don't get your hopes up, Bibi. There's only so much a technological tactic can do after such a big strategic blunder. Besides, the folks on those ships had camera phones, too.

Every few hours, the Israeli Defense Forces is uploading to YouTube a new video meant to demonstrate that their troops acted responsibly -- and that the people in the "Free Gaza" flotilla were the hostile ones.

At around 10 p.m. local time Monday night, it was footage taken by IDF naval boat showing the passengers beating up Israeli troops. An hour later, it was a clip of the "knives, slingshots, rocks, smoke bombs, metal rods, improvised sharp metal objects, sticks and clubs" found on board the Mavi Marmara. About two hours ago, the IDF showed how it was unloading "humanitarian cargo" from the ships and into Gaza. In between, the IDF is providing a stream of Twitter updates and blog posts to reinforce its position.

But no one -- not even the Israeli military -- seems to think it'll make much of a difference in the international tide of ill will following the raid. "We know one thing for sure, in the media we are going to lose the war anyhow," Shlomo Dror, a spokesman for Israel's Defense Ministry, told the Christian Science Monitor. "It doesn't matter what we do."

Dror made those comments on May 28 -- days before those commandos stormed the Free Gaza flotilla. Israel gave up on the information war before it even started.

The IDF has been practicing a willful indifference to global opinion for years. After the Hezbollah war of 2006, it decided that sensitivity to outside perception made its forces too hesitant, and put lives on both sides at risk. So in its 2009 Gaza campaign, the IDF decided to do the exact opposite: Shut out the international press, and fight without restraint and without a care about what anyone else thought.

The IDF did embed camera crews in its combat units, but they were there to defend troops against accusations of war crimes. Meanwhile, a young Israeli soldier -- born in a small town in Hawaii, and converted to Judaism at Yale -- got together with another American Israeli who thought it'd be cool to share some of those videos online. That became the IDF's official YouTube channel, unexpectedly generating millions and millions of views. But social media (and information operations, generally) remained on the periphery of Israeli planning.

Just look at the heavy-handed, tone-deaf response to the "Free Gaza" ships. "The IDF had hoped to obtain a complete media blackout and planned to jam the signals from the Mavi Marmara," the Jerusalem Post reports. "This did not work and the cameras on the boat successfully transmitted images throughout most of the takeover and enabled the activists to get their message out about the Israeli 'aggression.'"

"If I am in charge of doing that for the Israeli Navy, I am going to assume these people are smart and are deliberately trying to provoke a crazy response from my sailors and soldiers that will produce ready-for-television images that both isolate Israel within the international community and further raise the ire of the Arabic-speaking and Islamic worlds.... The last thing you want to do is return fire with 7.62mm, killing a bunch of civilians and giving the enemy exactly the effect he was looking for," Center for a New American Security fellow Andrew Exum blogs. "What happened today is the Israelis got their butts handed to them."

Pro-Palestinian activist Hussein Ibish agrees. "The whole point of the 'Gaza flotilla' was to get a reaction out of Israel," notes Ibish. "Israeli officials described it as 'a provocation' and I'm not sure that was entirely incorrect: Like all other acts of civil disobedience, it was designed to provoke a response. I'm shocked but not surprised that the Israeli military, which was determined to prevent those ships from reaching the Gaza port, managed to mishandle the situation so badly."

Maybe there's an argument to be made that certain countries -- the United States, for example -- are strong enough to ignore the rest of the planet. "With roughly the population of Houston, Texas, Israel is just not large enough to withstand extended isolation, meaning this event has profound geopolitical implications," Stratfor observes. The U.N. Security Council has condemned the raid. Israel's strongest ally in the Muslim world, Turkey, is speaking out against its one-time friend:

"Public opinion matters where issues are not of fundamental interest to a nation. Israel is not a fundamental interest to other nations. The ability to generate public antipathy to Israel can therefore reshape Israeli relations with countries critical to Israel. For example, a redefinition of U.S.-Israeli relations will have much less effect on the United States than on Israel. The Obama administration, already irritated by the Israelis, might now see a shift in U.S. public opinion that will open the way to a new U.S.-Israeli relationship disadvantageous to Israel.

"The Israelis will argue that this is all unfair, as they were provoked. Like the British [in the 1940s], they seem to think that the issue is whose logic is correct. But the issue actually is, whose logic will be heard? As with a tank battle or an airstrike, this sort of warfare has nothing to do with fairness. It has to do with controlling public perception and using that public perception to shape foreign policy around the world."

The next battle in that information war will come soon. Two more ships are headed towards Gaza. "Next time we'll use more force," one officer said.