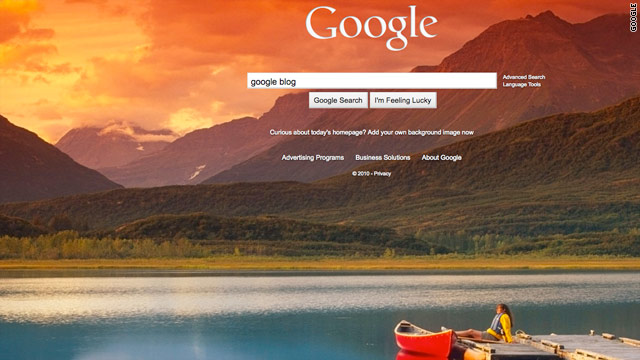 (CNN) -- You may have noticed that Google's simple white search page is much more colorful than usual.

Google rolled out the first of a set of backgrounds by noted artists on Thursday, promoting a new feature that lets users add their own photos as the search page's backdrop.

The feature was first announced last week. Beginning Thursday morning, users were greeted by a rolling set of images from a list of contemporary artists that will include Dale Chihuly, Jeff Koons and Tord Boontje. The page also will feature photos from National Geographic.

In a preview image on Google's official blog, a link promised to let users revert to the traditional Google look with a single click. But that link didn't appear to be on the live page as of mid-morning Thursday.

"Of course, since we want your Google homepage to be personal to you, you can still choose an image or photo from your computer or your own Picasa Web Album," the blog post read. "Whether you select an image from our new artist collection or prefer to have a more personal touch on your homepage, you'll still enjoy the speed and ease of use that you've come to expect from Google."

The change didn't go unnoticed by one of Google's competitors.

The folks at Microsoft's Bing search engine -- which also features colorful photos on its home page -- didn't have any official comment on their rival's new look.

But there was some snarky chatter on unofficial channels.

As reported by London's Telegraph, Ashley Highfield, Microsoft's director in the United Kingdom, had this to say on his Twitter feed: "Imitation (however pale) is the sincerest form of flattery: a certain search engine put up the same pic (tulip fields) used on Bing long ago."

While the personalization option may catch on with users, at least some people, perhaps thinking the background change is permanent, seemed to be balking. They also were turning to Google to help.