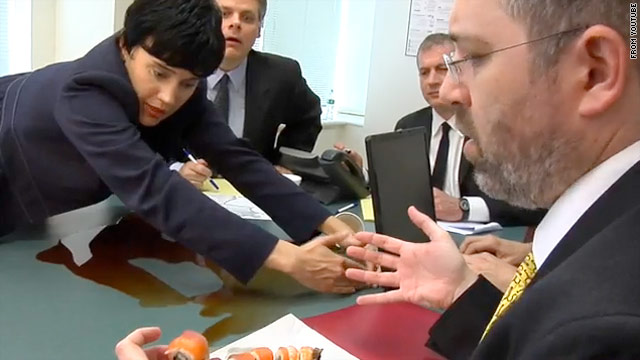 (CNN) -- People can't laugh at the spreading oil in the Gulf, the soiled wildlife or the coastal residents whose livelihoods have been devastated.

But they can laugh at BP, the corporation most hold responsible for the mess.

Making a mockery of BP and its unsuccessful efforts to stem the flood of oil has gone viral on the Web. And based on viewership, it appears the public would rather watch parodies of the disaster than BP's official responses to it.

UCB Comedy's video, "BP Spills Coffee," posted June 9, depicts what looks like a group of BP executives meeting in a boardroom. One of them knocks over a cup and spills coffee across the table. An executive reacts by saying, "Don't worry about it -- it's a small spill on a very large table."

After hours of increasingly ridiculous attempts to clean up the disaster, the group ends up abandoning the destroyed room.

As of Thursday morning, the video had been viewed more than 4.7 million times on YouTube.

The UCB Comedy site, a project of the Upright Citizens Brigade Theatre, also posted a video, "Rich Fish," in which a fake BP official tries to spin the oil disaster more positively by asking, "Has anyone considered how rich these fish have become? I mean they are literally swimming in money."

The Second City Network posted a video last month called, "BP- Bringing People together." The video, which has now exceeded 200,000 views, begins by asking, "What would you ask an oil company?"

It continues with a series of comments from average citizens, such as, "Are we moving forward?" However, the video gets a bit sticky when the third citizen wipes an oil-covered-hand across her forehead and says, "You know every choice we make affects the environment."

As the video progresses, the citizens get gooier and gooier with oily sludge. It ends with a completely drenched man saying, "I think they're doing a great job." Below the video, it provides a link to the official BP video it mocks.

Other Web campaigns are ridiculing BP via online contests to redesign the oil company's logo.

Logomyway.com, which lets clients hold design contests for company logos and T-shirts, started its own competition to redesign BP's logo.

"It was creative a way to get the word out," said Joe Dailey, who manages logomyway.com.

Many entries re-imagine the BP logo as dripping with oil, while one states that BP stands for "Bad Planning." As of Thursday morning, more than 746 entries had been submitted, and the contest's Web page had been viewed over 240,000 times.

Logomyway asks participants to communicate three concepts through their designs: the oil spill disaster, death of wildlife and incompetence. Deadline is June 26 and there is a $200 prize for the winning design, which will be chosen by votes from designers and the public.

Greenpeace, the environmental advocacy group, has introduced a similar contest, asking people to rebrand BP. The last day to enter designs in this contest is June 28.

"It allows the artistic community and public to vent their frustrations in a different way," explained Kert Davies, Greenpeace USA research director. "Some of them [the entries] are really good, and not funny at all."

A fake BP Twitter account, @bpglobalpr, which spoofs the company with a hilariously misguided public relations campaign, has attracted more than 168,000 followers. A post Wednesday read, "In the metric system "barrels" are called 'rugamuffins.' So 60,000 rugamuffins a day...pretty adorable, huh? #bpcares."